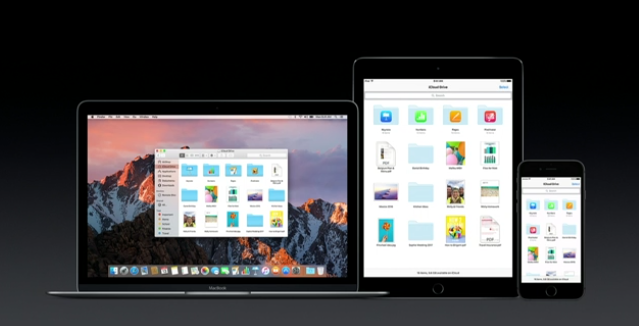 On stage at WWDC 2016, Apple has made it official: OS X is now macOS, bringing it in line with the rest of Apple’s software stable. It’s been a long time coming, but now iOS, macOS, watchOS and tvOS all look and sound the same. Continuing the theme of naming software after mountains, the next version is going to be called macOS Sierra.

But it’s not just a new name: Sierra has all sorts of cool new features you’ll want to hear about.

First up are the integrations with iOS. There’s a new way to unlock your Macbook: if you’re wearing an Apple Watch and you sit down at a computer, it will magically unlock.

There’s also a universal clipboard. It will keep everything you copy consistent across all platforms, so you can copy a link on your phone, and paste it onto your laptop. If it genuinely works seamlessly, this could be huge.

Next up is iCloud Drive, a feature we all kinda knew existed but never used. It will sync across your iPhone, iPad and Macbook, letting you share desktops across all devices. Not sure if that’s going to be a good thing, given how cluttered my desktop is.

Speaking of clutter, iCloud is going to help you manage your files. It will automatically file older files into the cloud, clearing up space for newer files on your desktop. Given Apple’s history with deleting people’s music from iTunes and uploading to the cloud, not sure how well this is going to go over.

Next up, Apple Pay. No surprises here, but Apple Pay is going online. Now, alongside PayPal and Visa as payment options when buying stuff online, you’ll see Apple Pay. Authentication will be possible using TouchID on an iOS device, which is pretty slick.

The final new trick? Siri is coming to the Mac.