In just about three weeks, Apple will release its earnings report for the recent holiday quarter. Naturally, most analysts will be preoccupied with iPhone sales, which is hardly a surprise given that the iPhone has long accounted for the vast majority of Apple’s revenue. Beyond the iPhone, though, it will be interesting to see how Mac sales stack up for the quarter, especially given that Mac sales haven’t increased significantly in recent memory.

Ahead of Apple’s official earnings report, new research data from both IDC and Gartner (via MacRumors) suggests that Mac sales for the quarter gone by increased by a modest amount compared to the year-ago quarter. Specifically, IDC and Gartner anticipate Mac sales to check in at 5.4 and 5.7 million units, respectively. By way of contrast, Mac sales during the 2016 holiday quarter checked in at 5.3 million units.

All told, IDC believes that Apple for the entirety of 2017 sold 19.6 million Macs, representing a more than 5% increase from 2016. IDC’s data further reveals that Apple last year was the fourth largest PC maker with a 7.6% share of the market, with the top three spots occupied by HP, Lenovo, and Dell. Notably, Apple over the past year refreshed a few of the Mac models in its lineup, with the most prominent release being the brand new iMac Pro which went on sale this past December. 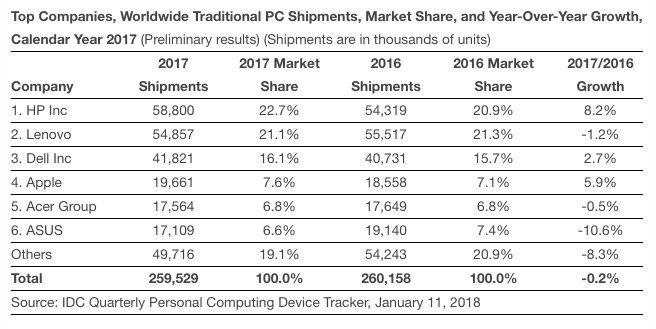 The chart below, meanwhile, reveals how Apple’s holiday quarter measured up to the rest of the PC market. Again, Apple and HP are the only two companies to experience any significant growth. 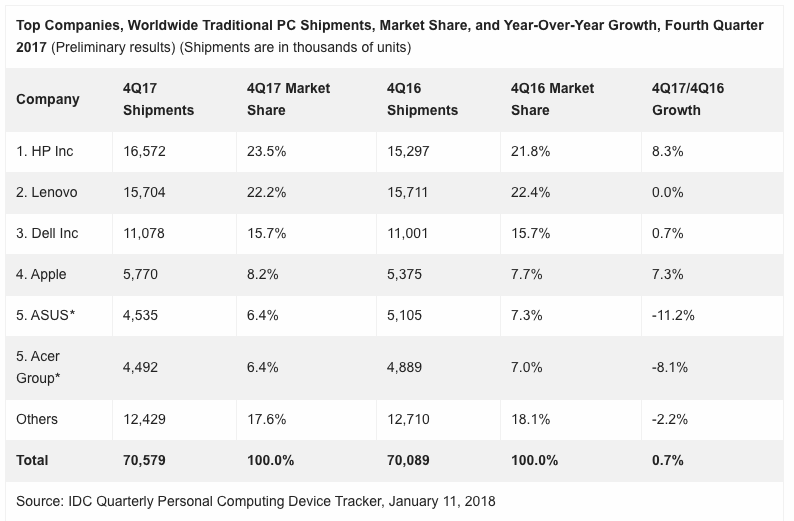