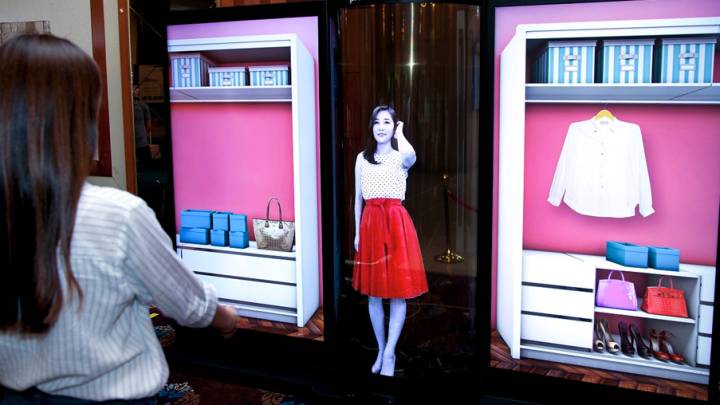 Setting new records in consumer tech is always an odd topic for a pretty obvious reason: the relentless advancement of technology means new “firsts” arrive on a near daily basis. Despite that, LG is pretty proud of its newest first-ever creation, and it’s hard not to be impressed by it. The company just revealed the “world’s first” 77-inch flexible OLED display, complete with transparency and 4K resolution. Would you ever need such a thing? Of course not, but just look at it.

The screen is a stunner. It’s extremely thin, and can achieve an impressive 40 percent transparency. It’s so flexible that it can be rolled up into a tube just over six inches across and still remain completely functional. For a display that is nearly six and a half feet on the diagonal, that’s a pretty impressive feat, and gives the whole thing a very surreal look when draped over an edge, like so:

Why would anyone need such a peculiar display? Well, there are a number of possibilities here. Turning it into a capable television would obviously require a bit of work on LG’s part, and even if it is feasible (which it may not be), it wouldn’t make much sense to have a flexible screen fixed to a flat wall anyway.

However, a similar screen could be a godsend for advertisers and really anyone who needs an ultra-portable high-resolution display that they can roll up and roll out at will. Imagine taking something like this to a tailgate party, or bringing it to a friend’s house to watch a flick or sports in 4K. It’s definitely cool, but as with all first-evers, concepts like this are always years away from implementation, if they ever reach consumers at all.