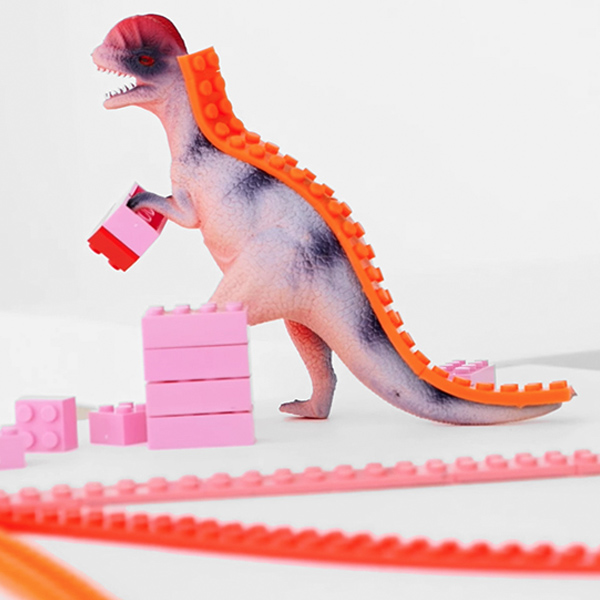 Humanity has had a handful of pretty cool moments over the years — landing on the moon, developing the polio vaccine, and of course inventing the whole “wheel” thing, just to name a few — but none of them even come close to matching the product that is currently tearing up the Indiegogo funding charts. It’s LEGO tape, and you’re going to beat yourself up for the rest of the day for not having thought of it first.

The tape, which, again, is glorious, isn’t actually an officially licensed LEGO product. In fact it’s not called “LEGO tape” at all, but Nimuno Loops, from the New York based Team Nimuno. However, the adhesive-backed tape is perfectly compatible with standard LEGO bricks, and they can be snapped onto it all the same. The tape is flexible and stretchable, and can be cut with a standard scissors. Once it’s cut to the desired length, you peel off the protective strip from the adhesive and slap it on whatever you want to turn into a perfect LEGO building surface. It can be wrapped around soft angles and bent to fit just about anywhere.

To say the Nimuno Loops crowdfunding campaign has gotten off to a good start would be the understatement of the year. With an incredibly modest goal amount of just $8,000 to pay for the tooling and dies needed to manufacture the tape, Team Nimuno has crushed it. Actually, crushed might be underselling it a bit, as the campaign has already passed $680,000 at the time of this writing, which is somewhere in the neighborhood of 8,500 percent of its goal. There’s still a month left in the fundraising effort. Now’s the part where you start kicking yourself.