I can be counted among the many, many people who thought Apple’s notched display design looked awful in leaks ahead of the iPhone X’s launch. Once I got the phone in my hands, however, I completely reversed my stance and ate crow. The iPhone X’s display design is terrific, because Apple took the time (and money) to do it right. Using a flexible OLED display and a brilliant internal design, Apple was able to bend the display behind itself at the bottom in order to hide the display controller. This way, the iPhone X has a completely uniform bezel on the bottom, sides, and the top corners of the screen. Then, the notch makes room for Apple’s TrueDepth camera and sensor array, as well as the front-facing iSight camera ear speaker.

I’ve discussed my change of heart a few times here on the site, and I’ve gotten plenty of feedback from readers who feel the same way. The iPhone X looked awkward and ugly before it launched, but it’s quite stunning in real life. It’s almost like Apple’s designers know what they’re doing! Anecdotal evidence is one thing, but now there’s hard data to support the notion that I’m not alone. The two things people complained about most ahead of the iPhone X’s release have turned out to be two of people’s favorite things about the phone.

Think back to all the leaks and rumors just ahead of the iPhone X’s unveiling last September. Then think about people’s reactions once the new phone was announced. What were the two things hardcore Apple fans complained about once all the details were revealed in leaks? And which two features did everyone else start whining about once the phones were announced? Yup, I’m obviously talking about the notch and the lack of Touch ID, which was replaced on the iPhone X by Face ID.

Apple wasn’t the first smartphone maker to include a fingerprint sensor on a smartphone. But Apple singlehandedly popularized the feature and made it the most common way to unlock any popular smartphone. The same can be said of the notch. LG had a phone with a piece of the display cut out long before Apple released the iPhone X. Smartphone startup Essential also has a notch on its first phone. But once again, Apple had a different take on this particular feature, and now Android phone makers are tripping over themselves to copy it. 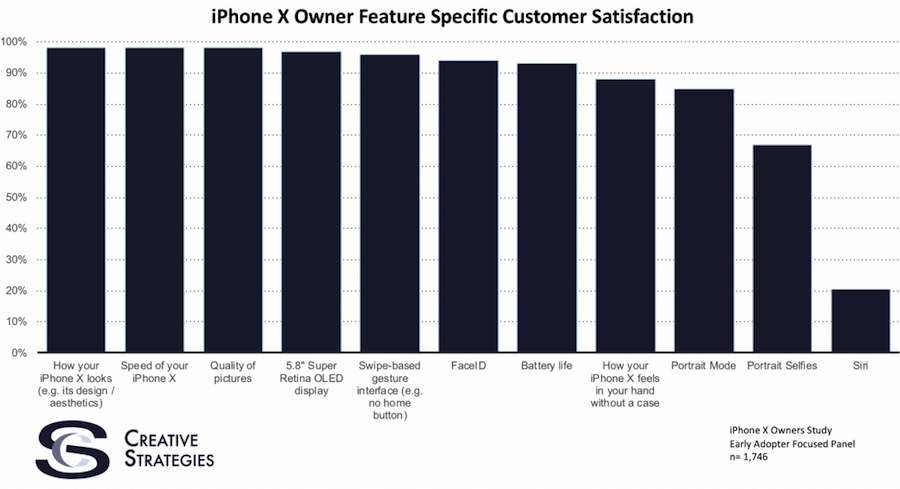 Well, it’s not just Android smartphone vendors who love Apple’s notched display design. In fact, Tech.pinions just published a survey that reveals which features iPhone X users are most satisfied with, and the phone’s design is at the top of the list. Believe it or not, satisfaction with the phone’s design was almost at 100%.

And what about Face ID, which caused an uproar because people were so afraid of losing Touch ID and replacing it with a technology that might not work in all the same scenarios? Well, the survey found that the satisfaction rate with Touch ID is just under 95%.

We covered the survey earlier today, but we focused on users’ least favorite feature… which is obviously Siri. There’s no surprise there. But the fact that two of iPhone X users’ favorite features are two things we heard the most complaints about ahead of launch is a testament to the fact that people — myself included — can be far too quick to rush to judgement.