The Shortcuts app on the iPhone is full of iPhone tricks designed for power users. But Apple, in typical fashion, has made it easy enough for even casual users to take advantage of. The Shortcuts app can be downloaded from the App Store. It essentially makes it easy for users to automate all sorts of actions with personal shortcuts. Even better, the Shortcuts app comes with more than 300 built-in actions. It can really help you squeeze even more enjoyment and utility out of your iPhone.

The most recent Shortcuts trick making the rounds on TikTok demonstrates how easy it is to set up and send pre-scheduled text messages. While certainly not a feature everyone needs, it can come in quite handy in a variety of situations. Some people might want to schedule a good morning text to their significant other. Others might even want to fire off an important text message for a time that you might otherwise be sleeping or traveling with no connectivity. For those and countless other cases, this particular iPhone trick is well worth committing to memory.

One of the best iPhone tricks you’ll see

The iPhone trick in question isn’t exactly new. But seeing as how it’s not well known, it’s not surprising that the instructional video recently posted to TikTok by Frank McShan went viral. To get started, the first thing you’ll need to do is download and open up the Shortcuts app. Next, tap the Automation icon on the bottom toolbar. That’s where you’ll want to select “Create Personal Automation.”

Following that, select “Time of Day” and select the time you want the message to be sent. Now you’ll want to hit the “Next” option located in the upper right-hand corner of the screen. Upon doing so, select “Add Action” and you’ll see a “Send Message” section towards the middle of the screen. Scroll through and select the person you’d like to message.

You should now see a window that looks something like this. 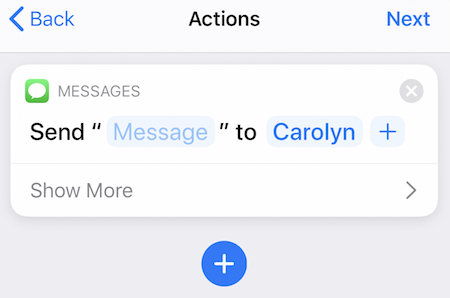 You can now personalize the message by tapping on the greyed-out “Message” and replacing it with whatever you want. After that, simply select “Next” at the top and then disable the toggle to “Ask before running.”

The TikTok video explainer can be seen below:

Did you know you could do this? 🤯

This trick is certainly slick. But the best iPhone trick I’ve stumbled upon in recent weeks shows how easy it is to record video while simultaneously playing music in the background from apps like Spotify and Apple Music.

It’s a niche trick, to be sure. But it comes in handy if you want to shoot video footage with a built-in soundtrack and not have to deal with any editing after the fact.

As we explained a few months ago:

All you have to do is open up the Camera app and instead of navigating over to the Video setting, keep the Photo setting at the forefront. Now, with your background music still playing, simply press down on the white button and drag your finger to the right. The white selection button will quickly turn into a red “Recording” button as you drag your finger towards the edge of the display. Once there, you can release your finger and your phone will keep recording with the background music of your choice in full effect.

With iOS 15 out now, it stands to reason that we’ll be seeing a lot more iPhone tricks and tips popping up on TikTok sooner rather than later.

Want to see even more cool iPhone tricks? Check out this one that went mega-viral on TikTok.