Samsung’s Galaxy Note 10 and Galaxy Note 10+ are a week away from being released, Huawei has killer new flagship phones on the way, the OnePlus 7T Pro will likely debut soon, and Google’s hotly-anticipated Pixel 4 and Pixel 4 XL are set to be announced less than two months from now. There are so many new flagship phones that will be released in the late summer and early fall this year, and yet it seems like almost all attention is already focused on Apple’s upcoming new iPhone 11 lineup.

The iPhone 11R, iPhone 11, and iPhone 11 Max — or iPhone 11, iPhone 11 Pro, and iPhone 11 Pro Max as they’re now rumored to be named — won’t be huge upgrades compared to the current iPhone XS lineup. In fact, the iPhone 11 lineup in 2019 is shaping up to be just like the iPhone 7 lineup in 2016. Apple decided to reuse the same hardware design for a third consecutive year with the iPhone 7, but it added a few new features and an upgraded camera. This year, the iPhone 11 series will look exactly like the iPhone XS, XS Max, and XR from the front, and the back will be about the same aside from the new rear cameras; according to multiple independent reports, Apple’s two flagship iPhones will have triple-lens cameras while the entry-level iPhone 11 will sport a dual-lens rear shooter.

We know so much about these upcoming new iPhone 11 handsets already thanks to all the leaks and well-sourced reports out there. Now, however, we might’ve just learned even more about these unreleased Apple phones thanks to a huge leak.

As a quick refresher, here’s what Apple’s new iPhone 11 handsets are expected to look like:

As you can see, they look a whole lot like the iPhones that are already out now, but they have a new square camera bump that’s color-matched to the back of the phone. Also cool is the fact that reports from at least two reliable sources say that the back of the iPhone 11 series handsets will be one continuous piece of glass including the camera bump, so there won’t be a separate piece of metal sticking out of the glass like there is now on the iPhone XS.

There are plenty more details that have already been rumored about Apple’s upcoming iPhone 11 models, but now a Foxconn employee has supposedly leaked a bunch of previously unknown info about the unreleased phones. The following screenshot of an email was posted by Antutu’s Chinese-language blog on Wednesday morning: 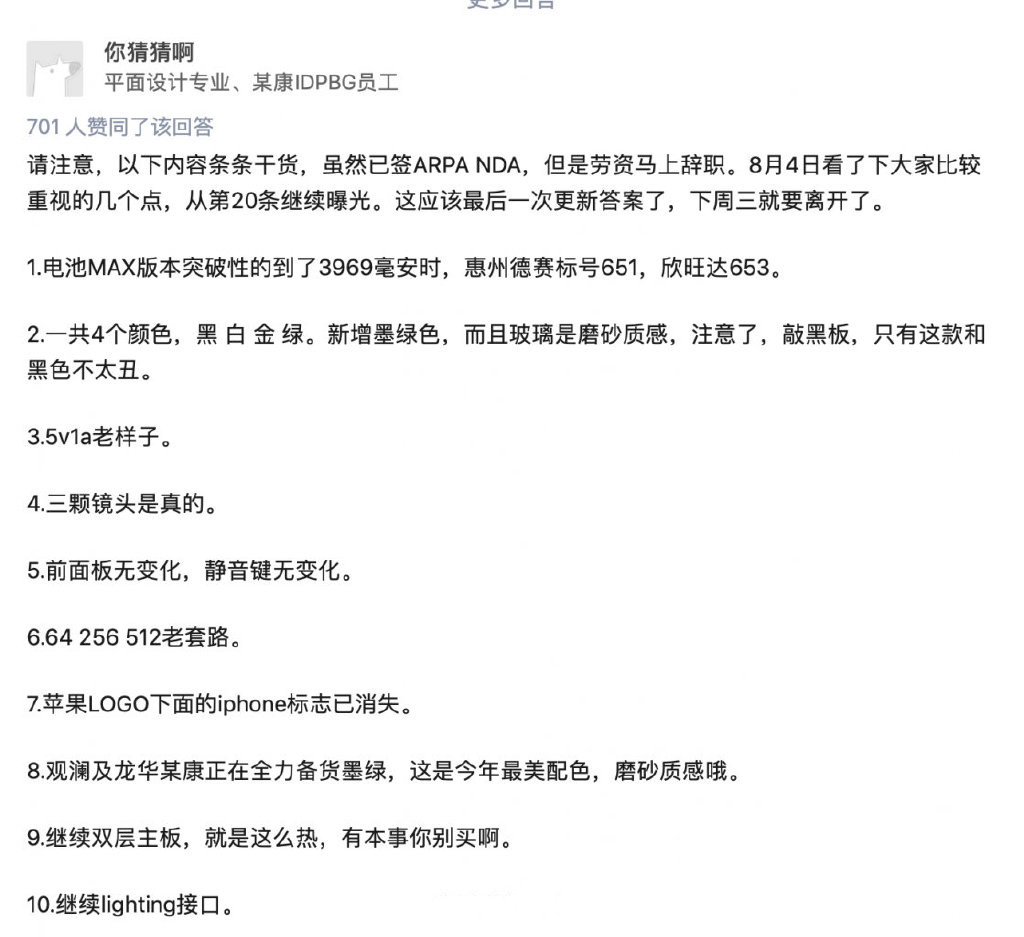 We can’t confirm the origin of the note, of course, but Antutu claims that its inside source is legitimate and reliable. If the intel is genuine, there are definitely a few interesting tidbits to be found.

According to this supposed insider, Apple’s new flagship iPhone 11 models will come in four colors, not three. In addition to Space Gray, Silver, and Gold, there’s also a new dark green color that has been added. This is the first we’ve heard of the new color, but there is certainly precedent for a move like this. Back in 2016, Apple added “Jet Black” to its iPhone 7 lineup when it decided to use the same hardware design for three consecutive years.

In addition to the new color, the alleged Foxconn worker says the glass on the back of the phone now has a matte finish and the word “iPhone” is no longer printed on the back. Top Apple insider Ming-Chi Kuo from TF International Securities had previously said that the iPhone 11 series would use frosted glass on the back instead of clear glass like previous models, but this is the first time we’ve heard that Apple is deleting the iPhone logo from the back of its phones.

Beyond that, the supposed insider claims that the new iPhones will retain Apple’s Lightning port as opposed to switching to USB-C, which is something that had been rumored briefly. 64GB, 256GB, and 512GB sizes will be made available, and there will reportedly be no increase to charging speeds. Finally, the leaker claims that the iPhone 11 Max will have a 3969 mAh battery supplied by Huizhou Desai and Xinwangda.

Apple is expected to unveil the new iPhone 11 lineup during a press conference on either September 10th or 11th, and a reliable leak suggests that they’ll go on sale on Friday, September 20th.