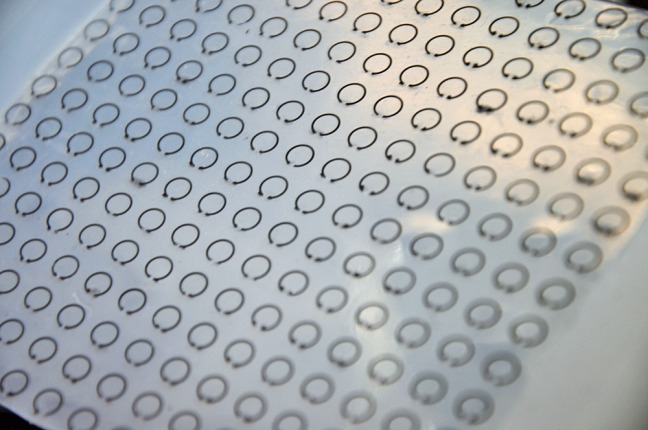 Do we really need invisibility cloaks like the one Harry Potter uses at Hogwarts to move around undetected? Apparently, we do. At least two projects are studying materials that can hide the objects they’re placed on, though these newfound technologies won’t fool the human eye just yet. Instead, invisibility cloaks could conceal objects from cameras and from radar.

Researchers from the Iowa State University recently published a paper in Nature that describes a new material that can suppress radar waves up to 75%. The scientists embedded split ring resonators containing Galinstan in silicon sheets (image above), creating this invisibility cloak that is capable of hiding a fighter jet from radar, at least in theory.

Galinstan is a metal alloy that becomes liquid at room temperature and isn’t as toxic as mercury, which acts similarly, Everything RF explains. The rings create electric inductors and the gaps create electric capacitors, resulting a resonator is capable of trapping and suppressing radar waves.

When an object is covered in this material, radar waves are suppressed from all angles and directions, though it’s not a technology that’s 100% effective just yet.

Meanwhile, Berkeley scientists are working on a type of “invisibility cloak” that reflects light to keep an object hidden from sight (image above). The technology relies on gold nanoantennas that are capable of “rerouting reflected light waves” as soon as the gold’s polarization is switched on.

The video embedded below explains this exciting new technology.

This new tech doesn’t function on a large scale just yet, so it’s not exactly capable of hiding sorcerers for the time being. It has been shown to work effectively on a microscopic scale though, capable of completely cloaking minuscule objects.