There’s a very special Chinese “woman” who has become a bit of a celebrity over the past year or so, making public appearances and chatting with countless curious fans. Her name is Jia Jia, and she appeared at a prestigious economic event in Shanghai earlier today. She’s charming, poised, and adept at conversation. She can dish out compliments and dodge awkward romantic advances. She’s also completely fake.

Jia Jia is a humanoid robot created by a team of robotics engineers from the University of Science and Technology of China, but at first glance you might actually mistake her for a living, breathing human being. She is the first of what her creators believe will be many, many lifelike robots that take over various low-skill tasks in places like restaurants, hotels, and even private households within the next decade. 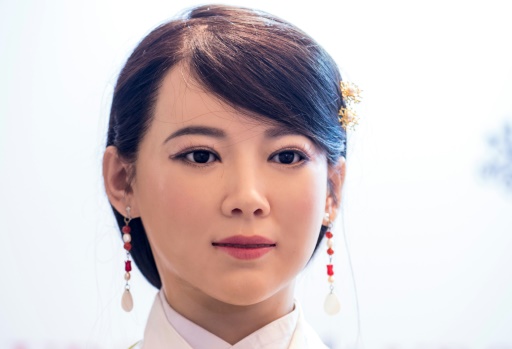 Unlike the overwhelming majority of almost-human bots that have appeared in the past decade or so, Jia Jia has very little of uncanny valley aesthetic that makes most bots seem so fake. She can recognize faces and learn things, which add to the realism factor. Everything from her hair to her various accessories and clothing choices seems spot on, that is, until she starts talking.

Jia Jia’s conversation skills are impressive, and she’s able to carry on a back-and-forth dialogue without many stumbles, but her nearly-real facade breaks down once you see her actually mouthing out the words. But accurate lip syncing is far from the the only aspect of Jia Jia that requires further development. The robot, which is more of a proof of concept than anything else, still can’t actually walk on its own. Jia Jia’s makers already have a newer, more nimble bot up and running, but it doesn’t yet have the good looks of its predecessor.

We’ll have to wait and see if we’re really only a decade away from humanoid robots taking over typical service jobs, but if Jia Jia’s lifelike appearance is any indication, in ten years we might not even know the difference.