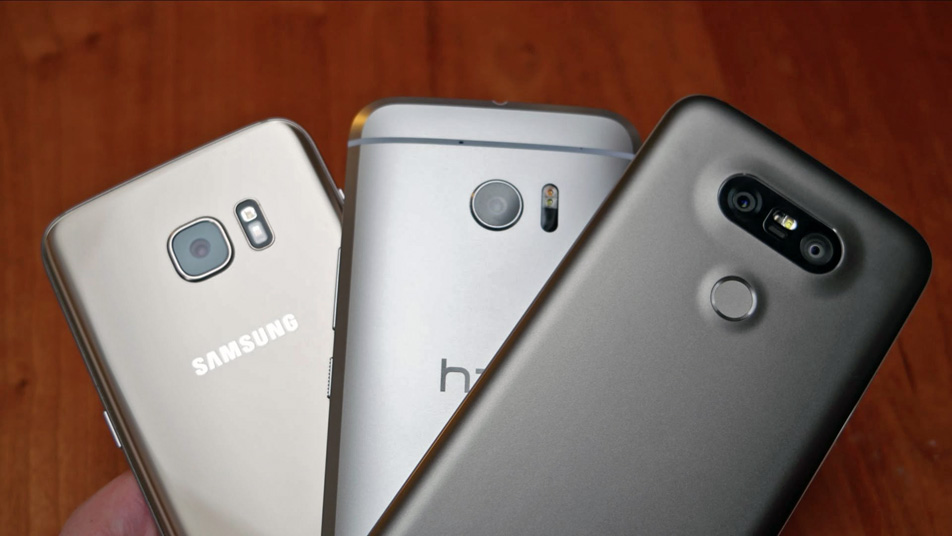 The HTC 10 is now official, which means the last piece of the Android flagship puzzle has fallen into place. If you haven’t already read our in-depth HTC 10 review, you should definitely make it a point to catch up. HTC has done phenomenal work with its latest high-end handset, addressing nearly every pain point users had and putting together a smartphone that checks almost every important box.

Now that the Android landscape for the first half of the year has been laid out, we’ll be spending plenty of time comparing all the new Android flagships in an effort to help readers find the right phone. To start things off, we’re going to look at the brand new HTC 10 as it compares to the most popular flagship Android phone in the world right now, Samsung’s Galaxy S7.

DON’T MISS: How to get 2GB of free data from Verizon in just a few seconds

Samsung’s Galaxy S7 and Galaxy S7 edge represent the two best smartphones Samsung has ever released. Frankly, they might be the two best Android phones, period. The answer to whether or not that’s the case was much clearer before the HTC 10 was unveiled though, and now it’s time to compare these great phones’ five most important features.

We’ll begin with performance because it’s one of the easiest comparisons to make.

If you measure performance mainly using benchmark test results, the HTC 10 is the winner here by a wide margin. The phone scored over 145,000 on Antutu tests that we ran while reviewing it, making it the most powerful smartphone in the world. Other sites’ tests climbed all the way up into the 156,000 range.

Meanwhile, the Galaxy S7 and Galaxy S7 edge score somewhere in the 136,000 range, on average.

Real-life usage is often a different story, and in most use cases the gap between these two phones will be much more narrow. I’ve spent a fair amount of time comparing the two though, and the edge definitely goes to the HTC 10.

HTC made some serious improvements to its touch experience and as a result, the HTC 10 has what HTC claims is the lowest touch latency in the world. I personally still find that the iPhone 6s is a bit more responsive, but that has to do with iOS in addition to touchscreen hardware and software.

Sticking to the HTC 10 vs. Galaxy S7 comparison though, the difference it pretty noticeable. I find the HTC 10 to be far more fluid than Samsung’s handsets, and combined with the edge HTC has over Samsung in the power department, the HTC is the winner here.

Battery life is another area where the winner is clear, and it’s another check in HTC’s column.

The HTC 10’s large 3,000 mAh battery is only part of the story here. HTC has also made a number of software optimizations that minimize battery drain. For example, the phone is remarkably efficient while it’s at rest — I’ve found that it only loses a few percentage points of its charge overnight, for example.

Even with heavy usage while reviewing the handset, HTC’s new flagship phone has lasted us well over 24 hours per charge. Samsung’s Galaxy S7 doesn’t even last that long with normal usage.

The camera category is just as easy to call as the battery life category, but this time the win goes to Samsung.

DxOMark gave the HTC 10 an 88 following its tests, which is tied for the highest score it has ever given a smartphone camera. Which phone is that score tied with? Samsung’s Galaxy S7.

With that having been said, DxOMark hasn’t released the full results of its tests to the public, so we’re not sure exactly how it determined that figure. To our eye, the Galaxy S7’s camera handily tops the HTC 10.

In low-light settings, the difference between the two cameras if plain as day. Samsung has the edge by a landslide. In good lighting the difference is much more narrow, but we still find photos captured on the Galaxy S7 to be far more crisp and true to color.

Another area of this comparison that’s easy to call is display quality.

Nearly everything you do on your smartphone involves looking at the display, so the quality of that display is a big deal. Just ask iPhone users, who still have to deal with a 720p LCD screen if they opt for the smaller 4.7-inch iPhone 6s.

The Galaxy S7, Galaxy S7 edge and HTC 10 all feature 2K “Quad HD” resolution, but the Super AMOLED panel on Samsung’s phones is in a league of its own. As it compares to the HTC 10’s Super LCD 5 screen, blacks are deeper and colors are far more vivid.

Our fifth and final category for this comparison is by far the most difficult to judge since design is largely a matter of personal preference.

Until 2015, Samsung’s flagship phones couldn’t even compare to HTC’s high-end handsets where design and build quality are concerned. They were made out of plastic that felt thin and cheap compared to HTC’s metal phones, and their designs were certainly nothing to get excited about.

That changed last year with the Galaxy S6 and Galaxy S6 edge, which were made entirely of glass and metal. Sure they featured designs that appeared to be inspired by the iPhone 5 and iPhone 6, but they tied everything together in a clean, sophisticated way. In 2016, the Galaxy S7 and Galaxy S7 edge further refine the designs Samsung showed us last year, and the results are gorgeous — particularly in the case of the larger Galaxy S7 edge.

Meanwhile, HTC’s flagship phones have all looked very similar for the past four generations beginning with 2013’s HTC One M7. The new HTC 10 is the sleekest and most sophisticated iteration of that design by far, but it’s still an iteration.

Again, this is clearly a matter of preference, but we give the edge to Samsung in the design category.