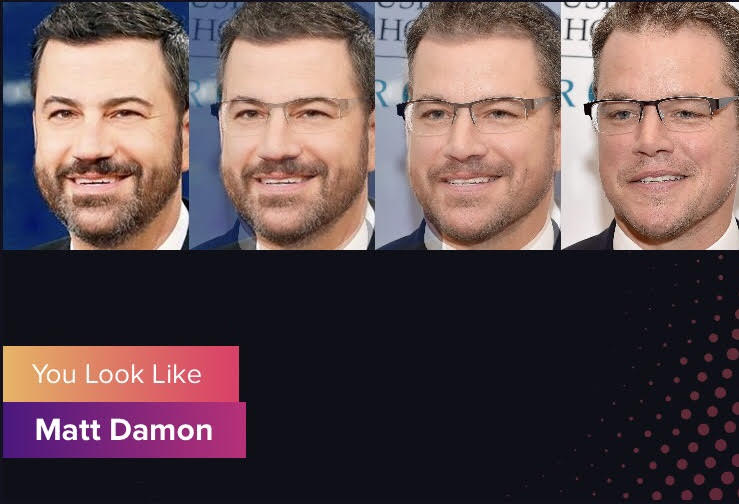 If that image at the top of this post which late-night talk show host Jimmy Kimmel posted to his Twitter and Instagram feeds on Thursday doesn’t immediately look familiar to you, count yourself lucky. It means you somehow aren’t aware yet of the latest face app to take the internet by storm — it’s called Gradient, and thanks to influencers and other social media mavens helping it along, it’s been spreading across peoples’ feeds in recent days thanks to its pretty simple conceit: Matching your face to that of your celebrity doppelganger.

It’s available for both iOS and Android devices, and it immediately calls to mind FaceApp — the app that launched earlier this year and similarly turned into a viral hit thanks to the way it took a photo of you and did a creepily good job imagining what you would look like as an old person. It was created by a group of Russian developers, so, of course, that was quickly seen as problematic.

Not much is known about the creators of Gradient (a mysterious entity called Ticket to the Moon Inc.) which has seen its popularity spike thanks to celebrities picking up on it, like Kimmel as well as Diplo and the Kardashians.

The Gradient image Kimmel shared is hilarious because it showed him morphing into the face of actor Matt Damon, with whom Kimmel has long jokingly nurtured a manufactured beef. Other users have similarly posted lighthearted results when they’ve tried the app:

At the time of this writing, the app has been downloaded more than 1 million times from the Play Store and has an average review of 4.3 stars. Not everybody who’s tried it has been a fan. One recent review left on the Play Store reads: “Stupid ‘you look like’ feature i’m a young male with square shaped face and beard and mustache and found out so far that i look like Lana del ray, Jack nickleson and bruno mars! interesting. it doesn’t do anything rather than mixing your picture with some random celebrities.”

The most important thing to note: You can use the app free for three days. Once that trial period is up, you’ll be charged at a rate of either $4.99/week or $19.99/month if you forget to cancel.