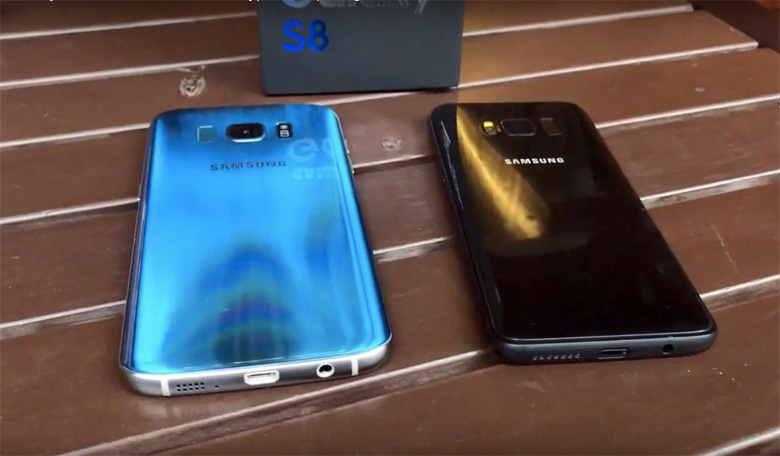 Apple’s iPhone 7 Plus features a screen that measures 5.5 inches diagonally. While nothing is set in stone at this point, multiple reports from reliable sources suggest that the Galaxy S8 — the smaller of the two flagship phones set to be unveiled by Samsung two weeks from today — sports a display that measures 5.8 inches diagonally. On paper, it seems like these two smartphones should be relatively similar in size, no? Well, as we can see in a new hands-on comparison video, Samsung’s bold new Galaxy S8 design is even more impressive than we thought when you line it up next to Apple’s flagship phablet.

With the Galaxy S8, Samsung has managed to stuff a 5.8-inch Super AMOLED display into a smartphone that is barely bigger than Apple’s 4.7-inch iPhone 7. It’s one thing to read those words, but it’s another thing entirely to see the smaller of Samsung’s two new Galaxy S8 phones lined up next to its stiffest competition.

Samsung’s upcoming Galaxy S8 and Galaxy S8+ flagship phones feature a bold new design that does away with the oblong home button beneath the displays and narrows the bezels above and below the screens substantially. As a result, the company is able to fit a very large screen into a phone with an overall footprint that isn’t much bigger than the screen itself.

How does that play out in the real world? The video below comes courtesy of YouTuber KK Sneak Leaks, and it shows what is believed to be a perfectly sized mockup of the Galaxy S8 created using accurate schematics leaked by the factories building Samsung’s new flagship phone. In the video, the narrator shows the phone next to Apple’s iPhone 7 Plus, which features a display that measures 5.5 inches compared to the 5.8-inch screen on the Galaxy S8. At around the 4:14 mark, you can see how the two phones compare in overall size.

Again, the Galaxy S8 shown in the video is not a genuine handset. Instead, it is a mockup that is believed to have been built exactly to scale. With that in mind, it’s pretty incredible to see just how much smaller Samsung’s Galaxy S8 is, with it’s 5.8-inch display, than the iPhone 7 Plus and its smaller 5.5-inch screen. And of course, if you want to see a real Galaxy S8 in action for comparison, you can always check out the exclusive Galaxy S8 photos we published earlier this month.

Meanwhile, the larger Galaxy S8+ Plus is expected to cram a massive 6.2-inch display into a phone that is roughly the same size as the iPhone 7 Plus. You can see size comparisons of those two phones in this post.