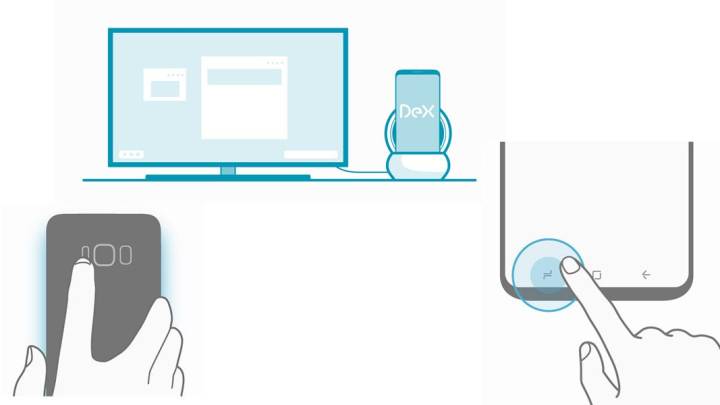 Leaks come from all sorts of sources, not just blurry photos from the backroom of Chinese factories. Today, we’re getting an advance look at some of the Galaxy S8’s most rumored features, courtesy of a leak about a completely unrelated device, Samsung’s Galaxy Tab S3.

Android Police got the scoop on a Galaxy Tab S3 system dump. Contained within were a number of images of the Galaxy S8. From the looks of them, they’re from some kind of walkthrough or help function that the tablet can display when pairing with a Galaxy S8, which makes sense.

But Samsung wouldn’t be Samsung if it didn’t tinker with the software a little, which is exactly what we’re seeing in the images. Gone are the standard Android navigation keys, replaced with different icons that look a lot more Tron-like.

As you’d expect, you get the multi-tasking button, home button and back button ordered from left to right, just like on Samsung phones currently. Unfortunately, the images also show a small bottom bezel, which eats a little into the edge-to-edge screen we’ve heard so much about.

The next image really just confirms two details we’ve already heard: the fingerprint sensor will be mounted on the back, awkwardly next to the camera, and there will also be a heart-rate sensor sitting back there. The rear-mounted fingerprint sensor was expected given the lack of a physical home button, but its positioning next to the camera lens (and off to the side) is bad for people with small hands, anyone who holds their phone in their right hand, and everyone who enjoys photos from a non-smudged camera.

Finally, we’ve got a peek at a desktop-style dock for the Galaxy S8. It’s called the DeX dock, and flips open vertically like a phone-eating bagel to accept your phone. There’s reputedly an HDMI port on the back, which lets you connect your phone to a display and use a desktop environment, if you’re into that.