Samsung’s Galaxy S8 was released back in April of this year, but it’s arguably still the best Android smartphone on the planet. Power and performance are still top-notch despite the fact that a few newer flagship phones have debuted since the S8 was released. And the design Samsung whipped up for the Galaxy S8 and Galaxy S8+ is hands down the sleekest and most stunning smartphone design the world has ever seen at this point. In fact, if rumors pan out and Apple indeed releases an iPhone 8 with that hideous cutout at the top of the display, the Galaxy S8 could very well be the best-designed phone of 2017 when all is said and done.

Of course, visual design is one thing but technical design is another. While the S8 indeed features the best looks we’ve seen so far, the glass front and back also make it one of the most fragile flagship phones ever. In fact, no smartphone has ever performed worse in SquareTrade’s drop tests. A new leak reaffirms that there’s a new version of Samsung’s Galaxy S8 that’s about to launch, and it addresses the current model’s biggest problem.

As recently as a few years ago, Samsung had a bizarre strategy for its flagship phones that involved releasing as many as a dozen different versions of the same smartphone. Thankfully that craziness has been reined in, but there’s one alternate version of the company’s flagship phones that has survived. That’s right, we’re talking about the Galaxy S7 Active, a ruggedized version of last year’s flagship Galaxy S phone. And in 2017, the S7 Active will get a successor.

Rumors surrounding Samsung’s Galaxy S8 Active have been floating around for a while now, but it looks like the phone is almost ready for primetime. An image of the new Galaxy S8 Active leaked late last month for the first time, and now performance test results have been spotted online.

Via Slashleaks, we find Geekbench 4 benchmarks on the Primate Labs website. Beyond the fact that they reveal impressive performance that even outshines some test results we’ve seen for the original Galaxy S8, the appearance of these benchmarks could mean that the phone is being tested by people outside of Samsung ahead of its release. 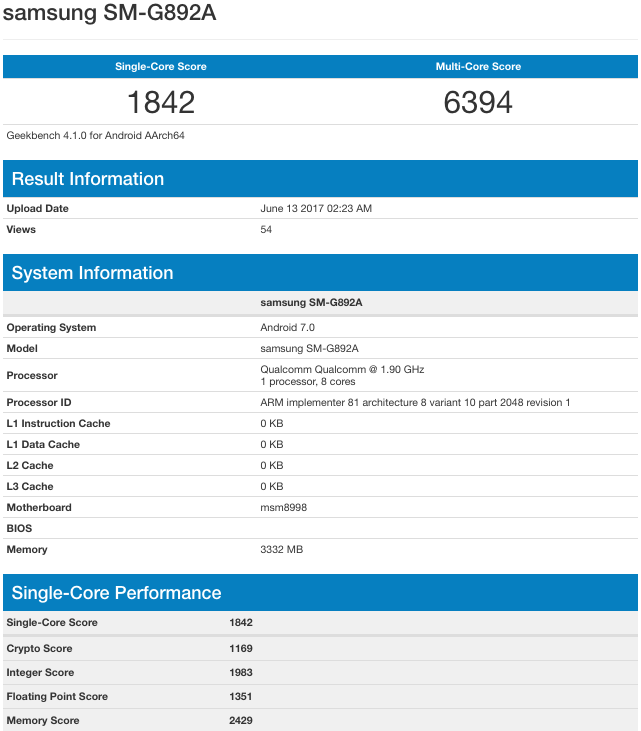 It’s still unclear when the Galaxy S8 Active will be released, but it should be very soon.