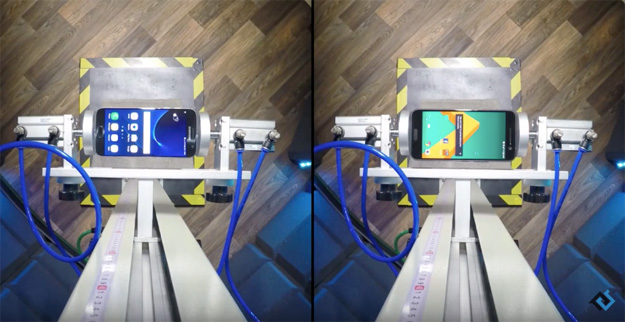 We’re not even halfway through 2016 at this point, but it’s quite possible that we’ve already see the two hottest ndew Android phones that will debut this year. We expect the upcoming Galaxy Note 6 to improve upon last year’s model in every way, the third OnePlus flagship phone is shaping up to be a beast, Motorola’s next Moto X could be the one we’ve been waiting for and the new Nexus phones should be great, but to be honest, we’re not expecting any of those phones to outshine Samsung Galaxy S7 or the HTC 10.

We already know that these two flagship phones are sleek, stylish and remarkably powerful (in fact, the HTC 10 is the most powerful phone in the world), but now it’s time to find out how durable they are.

YouTube user “PhoneBuff” got his hands on a professional-grade drop test machine and it’s beyond obvious that he’s going to have a whole lot of fun with this gadget. Built for professional testing, the machine is the same type of equipment used by consumer electronics manufacturers to test the durability of their devices.

The Galaxy S7 is constructed from sturdy glass with an aluminum mid-frame. The HTC 10 housing is made entirely of metal aside from the screen. Both phones feature surprisingly strong Gorilla Glass covering their displays. So they should be able to withstand a typical drop with no problem at all, right? Right?

We don’t want to spoil the fun for you but suffice it to say if you want either of these phones to last a year or two until you upgrade, you would be wise to invest in a smartphone case that provides a decent amount of protection.

The full cringeworthy drop test video is embedded below.