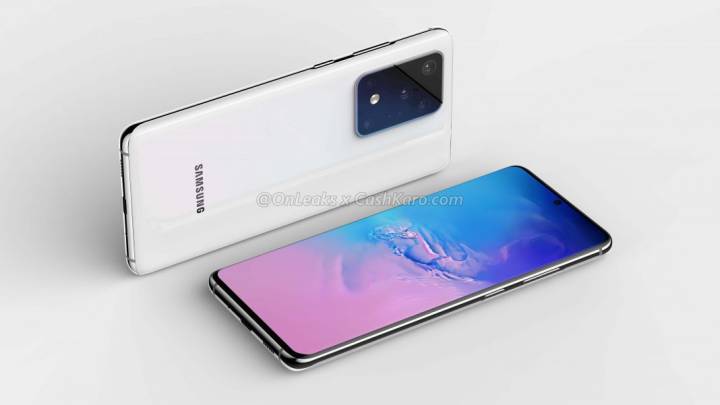 After leaking renders for the Galaxy S11 and Galaxy S11e over the weekend, @OnLeaks completed the collection on Tuesday by sharing renders of the Galaxy S11+ with CashKaro. While we don’t know what the company has planned for the 5G models of these new phones, we now have a pretty good idea of what Samsung is going to change on its next-gen devices, and what will stick around from this year’s models.

The overall design is, unsurprisingly, similar to what we saw from the Galaxy S11 and Galaxy S11e renders. The selfie camera has moved to the center, where Samsung has kept the Infinity-O display with its hole-punch cutout. The major change is clearly the rear camera array, which is truly something to behold.

While the vertical array will look familiar to anyone who saw the S11 and S11e renders, the S11+ may have a five-lens camera. As a result, the array is enormous, and the lenses appear to be scattered rather haphazardly within the array. Again, we won’t know if this is the final design of the phone until more leaks surface or Samsung officially reveals the phone, but we seem to be one step closer to the entire backside of the phone being cameras.

As for specs, the Galaxy S11+ is rumored to feature a 6.9-inch AMOLED display, in-display fingerprint scanner, 12GB of RAM, Snapdragon 865 processor, 108-megapixel camera with 5x optical zoom, and up to 1TB of internal storage. The Galaxy S11 series is expected to be announced in late February 2020, as the Galaxy S10 series was this year, but there are undoubtedly countless leaks to come between now and then.