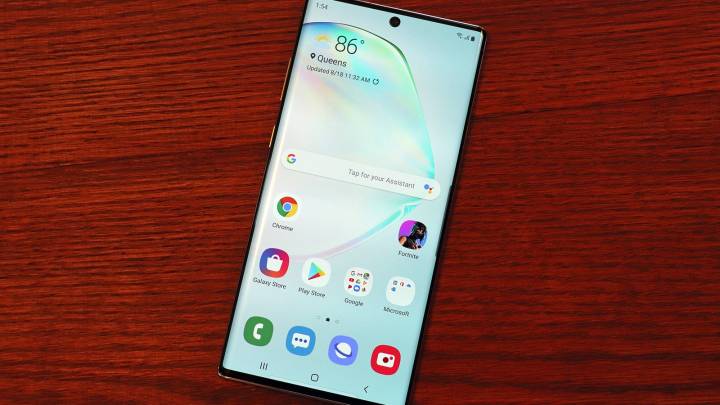 The Galaxy S10 was Samsung’s first flagship to make use of Infinity-O hole-punch screens, but not everybody liked the asymmetric display. The circular or pill-shaped display cutout sat near the top-right corner of the phone, rather than in the middle, housing up to two cameras and a depth sensor, depending on the model.

Samsung then came out with the Galaxy Note 10 in early August, utilizing a similar display. Only this time around, the hole-punch selfie camera is placed in the middle of the display, and only houses a single camera. Will Samsung be able to refine that design in any way? A new leak suggests that the Galaxy S11 will have an even better design, but you shouldn’t get excited about Samsung delivering a brand new take on hole-punch cameras in 2020.

The next big thing in smartphone design will be under-display cameras that allow for true all-screen phones. Everyone in the business is working on this technology, but we have no way of knowing when the displays will be ready for prime time. To that point, the Galaxy S11 will look a lot like the Galaxy Note 10, well-known leaker Ice Universe said, adding that he’s “certain” that the S11 will have a hole-punch display, with the hole placed in the center:

It is certain that the hole of S11 is at the center, but it is smaller than Note10. By the way, the upcoming vivo S5 will be the smallest hole phone in 2019, only 3.x mm, which is a comparison picture with Note10 and S10. pic.twitter.com/zkxPJC14DB

This is the Galaxy S11 rendering I made, based on the leaked information, don't take it seriously, it's just my imaginary. pic.twitter.com/CunwipElFP

The hole will be smaller than on the Note 10, the leaker says, but not that small. In other words, the Galaxy S11 will look almost exactly like the Note 10 from a distance, which isn’t something that has worked all too well for Samsung in the past. One of the reasons the Galaxy S9 sold worse than expected was the design. The phone looked too much like the Galaxy S8, as Samsung tried and failed to replicate Apple’s design strategy.

A recent leak claimed Samsung will add 3D cameras to the front of the Galaxy S11 which would support 3D face recognition. But such technology needs more than just a front-facing camera, for the time being, which explains why the iPhone 11 has the same notch as the iPhone X, or why the Pixel 4 has a huge bezel at the top.

A different leak provided other details about the Galaxy S11 design, saying that all five Galaxy S11 models, from the smallest one to the biggest one, will feature curved screens, something Ice’s render above respects. Interestingly, Ice was very critical of Samsung over the summer for ditching a purported waterfall display for the Note 10. The dual-edge screen has curvatures that are more prominent, going almost to the back of the phone. While Huawei already launched a phone with a waterfall display this year, the Mate 30 series, there’s no indication that the Galaxy S11 will feature a waterfall display.

That said, we’ve yet to see any Galaxy S11 renders based on leaked CAD designs that would confirm these leaks, and we might have to wait a while for those. Samsung is expected to launch the phone in mid-to-late February.