Samsung’s upcoming Galaxy Note 8 inches closer to release with each passing day. We’re just over a month away from the phone’s official unveiling, which is expected to take place in late August. As expected, the slow stream of leaks has now turned into a raging river, and we know just about everything there is to know about the upcoming new flagship phablet. There are still a few big questions surrounding Samsung’s upcoming Note 8 though, and now an exclusive leak from BGR crosses yet another big one off the list.

A recent report from a tried and true source of information surrounding unreleased smartphones painted a near-complete picture of the Galaxy Note 8 last week. According to the leak, the Note 8 will sport a large 6.3-inch Super AMOLED display, a 18.5:9 aspect ratio, 6GB of RAM, an Exynos 8895 or Qualcomm Snapdragon 835 chipset, dual 12-megapixel rear cameras, a 3,300 mAh battery, and an updated S Pen stylus. The same post claimed that the phone will retail for close to $1,000 when it’s released later this summer.

As for the phone’s design, we’ve known for quite some time now that it’ll riff on Samsung’s Galaxy S8 and Galaxy S8+ design from earlier this year. Considering the S8 has the hottest smartphone design the world has ever seen, that’s definitely a good thing. We’re expecting a new Infinity Display and possibly an even better screen-to-body ratio than the Galaxy S8’s class-leading 83%, but the back of the phone is still something of a mystery. At least, it was until now. 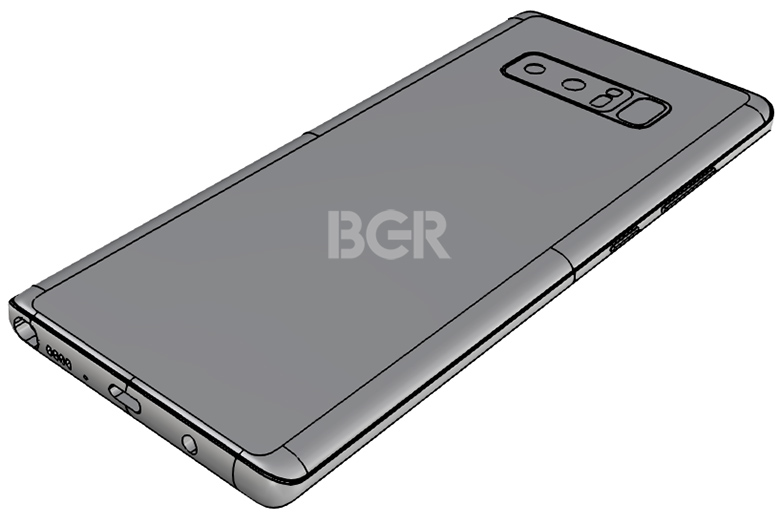 BGR has exclusively obtained a 3D CAD drawing of the Galaxy Note 8 based on schematics that came directly from the factory tasked with building the new phone. The image, shown above, answers the last big question we had regarding the phone’s design. Unfortunately, it’s not the answer we were hoping for.

Reports suggest Samsung wanted to integrate the Galaxy Note 8’s fingerprint scanner into the display, as we’re expecting on the iPhone 8. Unfortunately, Samsung was unable to get the necessary tech ready for mass production in time, so the company was forced to go with a fingerprint sensor on the back of the phone.

That’s bad enough, but unfortunately things get even worse. As you can see in our exclusive image, the fingerprint scanner is located to the right side of the phone’s rear camera. This design has been a big pain point for Galaxy S8 and S8+ users, and yet Samsung is now reusing it on a phone that’s even larger than those two models. What’s more, the dual-lens camera takes up even more space and pushes the scanner further to the side, making it even more awkward to reach.

A technical explanation for Samsung’s decision undoubtedly exists, but we don’t yet know what it is. As a result, all we can say is that Samsung is sacrificing the Note 8’s user experience to an even greater degree than it did on the Galaxy S8 and S8+, all so that it can ditch the home button on the front of the phone and keep the bezels as narrow as possible.

Samsung is expected to unveil the new Galaxy Note 8 in late August ahead of its release sometime in September.