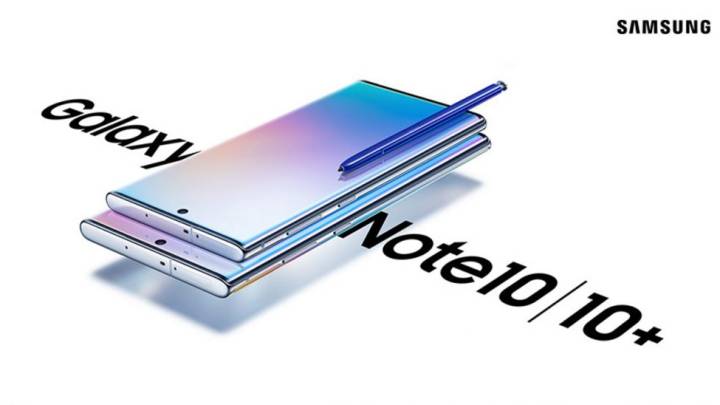 Samsung will unveil the Galaxy Note 10 this afternoon, but that doesn’t mean we’re done seeing Note 10 leaks. With hours to go until the phone becomes official, we’ve got a couple of new Note 10 leaks for you, including one that reveals several of Samsung’s marketing materials for the handset complete with official pricing for the US. And yeah, it’s not pretty.

First up we have the following Galaxy Note 10+ image that gives us a first look at the blue version of the handset, which will reportedly hit Best Buy soon. The news comes from well-known leaker Evan Blass. The phone should launch in several other colors according to recent reports, including a red/pink version that leaked earlier this week.

But it’s Droid-Life that delivered the most interesting last-minute Galaxy Note 10 leak. The Android blog got its hands on the Samsung’s marketing materials for the handset, which highlight the phone’s main features.

We’re probably going to see these “slides” on Samsung’s website once the phone is official. As you can see in these images, Samsung focuses on the phone’s all-screen design, the new S Pen stylus, the battery, the camera, and the video/audio recording capabilities of the phone.

“With Galaxy Note 10 we haven’t just made a new smartphone,” Samsung says. “We’ve designed a computer that’s a gaming console, that’s a film studio, and an intelligent pen, all in one device.”

Features that were rumored in the past few months like the new gesture support of the stylus, Super Fast Charging, and Audio Zoom are all mention in the presentation.

What’s more interesting about this leak is that Droid-Life updated its post with Note 10 prices and preorder information. First of all, Samsung will offer early buyers a “Create your own Galaxy Kit” package that gets you up to $150 in Samsung credit, and six free months of Spotify Premium.

The Note 10 starts at $949.99, while the cheapest Galaxy Note 10+ will cost $1,099.99. That’s 8GB/256GB RAM and storage combo for the smaller phone and 12GB/256GB for the bigger one. These prices are very much in line with the Note 10’s prices for Europe that leaked a bunch of times already, and we’re still not sure how much Samsung will charge for models with more storage or with 5G.

Samsung will unveil the Note 10 in just a few short hours, at which point it’ll likely confirm all these details.