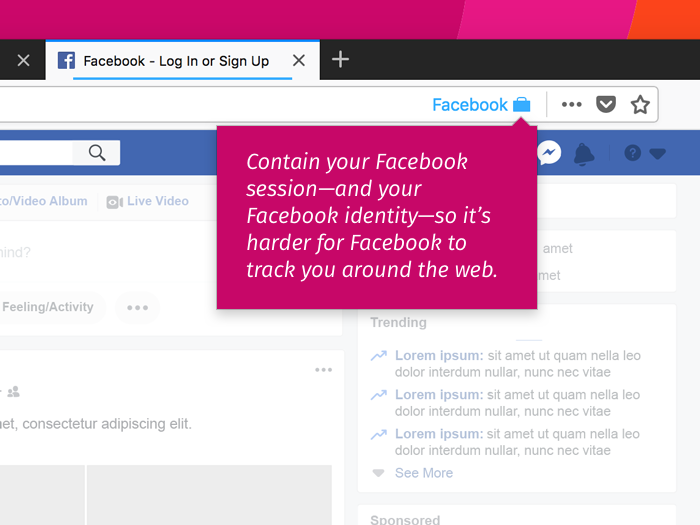 Facebook has been making headlines for all the wrong reasons in recent weeks as users are becoming increasingly concerned about how much data the social media platform is collecting from them. Mozilla has clearly been paying a great deal of attention to the blowback, as the team introduced a new add-on for Firefox called Facebook Container on Tuesday. As the name suggests, the add-on makes it harder for Facebook to track your every move.

As Mozilla explains on the page for the add-on, Facebook Container isolates your Facebook identity into its own tab so that Facebook has a harder time following you as you browse to other sites. It sounds surprisingly simple, but by simply cordoning Facebook off from the rest of the internet, the site won’t be able to follow you as easily.

Once installed, the add-on will immediately delete your Facebook cookies and log you out of the site. The next time you visit Facebook, the site will load up in a separate, blue-colored browser tab (the “container”). Log in to Facebook as you normally would in the new tab. Going forward, any non-Facebook link you click will load outside the container, and if you try to share something on Facebook from another tab, it will load inside the container.

“It is important to know that this extension doesn’t prevent Facebook from mishandling the data that it already has, or permitted others to obtain, about you,” Mozilla warns. “Facebook still will have access to everything that you do while you are on facebook.com, including your Facebook comments, photo uploads, likes, any data you share with Facebook connected apps, etc.”

In other words, this add-on wouldn’t have stopped the Cambridge Analytica debacle, but if you can’t afford to delete your profile altogether, Facebook Container is a decent half measure to keep Facebook tracking at bay.