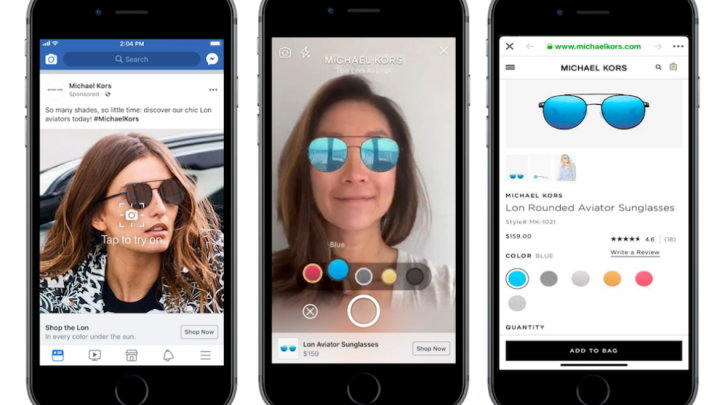 At an event for reporters and marketers today in New York City, Facebook announced a new option it’s testing for advertisers, a way to use augmented reality to help bridge the gap somewhat between a digital ad and a real-world experience.

The social networking giant has started tests to bring AR ads into the News Feed. So far, the tests are only taking place in the U.S., and Facebook kicked things off with Michael Kors, with an AR ad that lets users virtually see what they’d look like wearing sunglasses.

At today’s event, Facebook exec Ty Ahmad-Taylor demoed a few different AR ad experiences, such as one that put his face into some Candy Crush gameplay. Also worth noting, this rollout follows Facebook’s announcement at F8 this year in which the company said it will also be using AR to put ads into the company’s standalone Messenger app.

About the News Feed ads that are currently in the test phase, TechCrunch notes that “These ads look like normal in-feed ads at first, but they include a ‘Tap to try it on’ option, which opens up the AR capabilities. And of course if you like the way it looks in AR, you can go ahead and buy the product.”

None of this should come as a surprise. Facebook is a monster advertising machine with a social network attached to it, and the company is tapping every app in its family — and using every bit of white space it can within those apps — to maximize the company’s advertising potential to the fullest.

On a related note, Facebook is also adding some video creation bells and whistles to its Ads Manager to spur brands to create mobile-optimized videos. Per TechCrunch, “The company cited several Facebook-commissioned studies during the event (today), including a survey of 335 ‘mobile-first’ shoppers in the U.S., which found that 1 in 3 believe video is the best medium for discovering new products.”