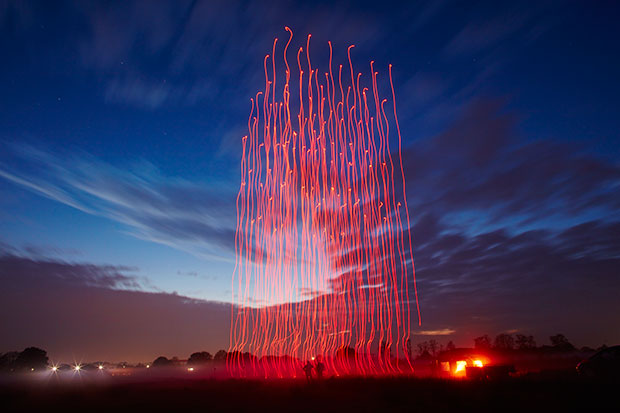 What do you get when you combine 100 drones fitted with color-shifting lights, Intel software and a full orchestra? A Guinness World Record and a very cool video, that’s what.

Intel headed to a remote area in Tornesch, Germany armed with the aforementioned fleet of drones as well as the aforementioned orchestra, and it ended up putting together a spectacular aerial display. In fact, as far as drone videos go this is perhaps one of the coolest ones we’ve ever seen.

DON’T MISS: The Detroit Auto Show’s hottest new car is a Buick – check out these pics if you don’t believe it

Intel set out to break the record for Most unmanned aerial vehicles (UAVs) airborne simultaneously, and it did so handily. In fact, Intel’s feat doubled the previous record of 50, which was set by the Naval Postgraduate School in Monterey California.

Rather than just send its fleet of 100 drones skyward, Intel decided to create a complex synchronized show that would light up the night sky, and it set the entire thing to a live performance of Beethoven’s Ninth Symphony. It doesn’t get anymore epic than that.

The Guinness World Record-setting swarm can be seen in the video embedded below.