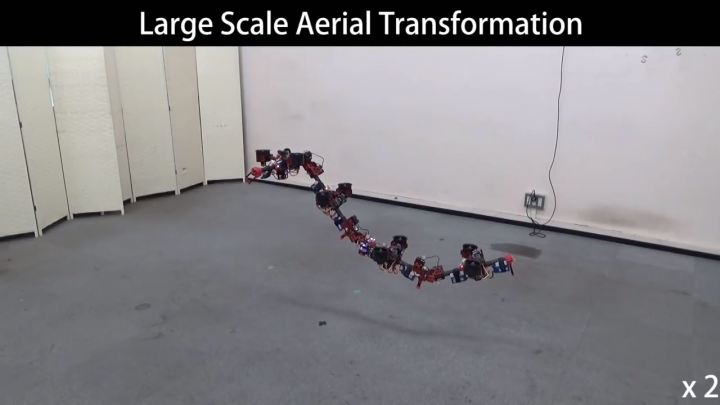 When you think of a drone, you probably imagine a small machine with four propellers and a camera strapped to the bottom. That’s what most consumer drones look like, but the team at JSK Lab at the University of Tokyo have built a fascinating new drone they call DRAGON, which stands for “Dual-rotor embedded multilink Robot with the Ability of multi-deGree-of-freedom aerial transformatiON.” No, that is not a joke. It’s really called that.

As IEEE Spectrum explains, the drone is made up of several smaller modules, powered by ducted fans and attached to one another by hinged joints, giving the drone the ability to transform while in motion. Each of the modules can roll and pitch in virtually any direction, which means the drone can snake through the smallest of openings.

In the video below, you can see the drone contort itself in such a way that it can slide through a small opening without getting stuck or hitting the bars on the sides. Even more impressive, the creators say that the drone is actually able to autonomously decide how to change shape based on the scenario. The device in the video is just a prototype, but the possibilities of a thinking drone can morph to solve problems are endless:

Fan Shi of JSK Lab describes the drone as “a breakthrough in hardware design which, in a beautiful way, connects a manipulation arm with a ducted fan-driven aerial robot.” DRAGON could be “an ideal platform for aerial manipulation, and I really look forward to its further applications and research.”