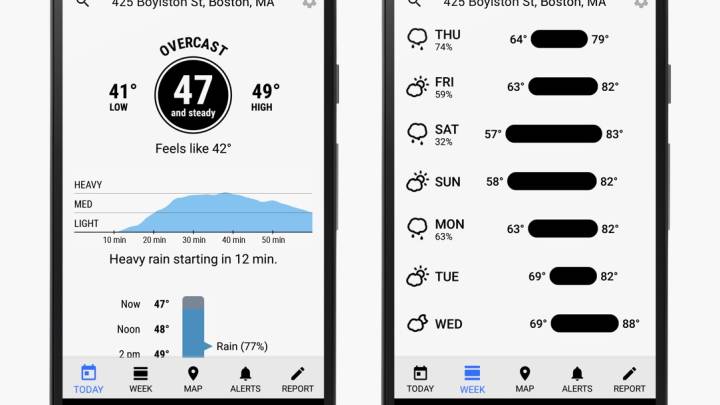 Google isn’t the only company with a surprise app release today.

On Thursday, the developers behind Dark Sky finally launched their popular weather app on Android — four years after it originally released on iOS devices. The team says that Android support has been the most requested “feature” ever since the initial release, but only now do they finally have the resources to pull it off.

DON’T MISS: This is what Doom looks like running on Nvidia’s insane new graphics card

If you’ve ever tried the iOS app before, you’ll be right at home with Dark Sky for Android. It features the same 24-hour and 7-day forecasts, daily weather reports, advanced notifications, beautiful weather maps and slick UI.

Along with all the traditional features, Dark Sky for Android has a few new tricks up its sleeve as well, such as home screen widgets with “current conditions, next hour rain forecasts, a daily summary, and a look at the week ahead.” You can even choose from three different widgets, depending on how much information you want to see: Next Hour, Today, and Weekly.

But the most attractive feature of the Android app might be its price point: $0.00. Unlike the iOS app, Dark Sky for Android will be completely free to download. The free version features current conditions, 24-hour and 7-day forecasts and weather maps, but you’ll have to purchase Dark Sky Premium for minute-by-minute forecasts, advanced notifications and alerts, and widgets.

The team says that this is an experiment, so if users aren’t happy with the business model, there’s a reasonable chance it will be changed within the next few months.

You can download Dark Sky on Android for free right now.