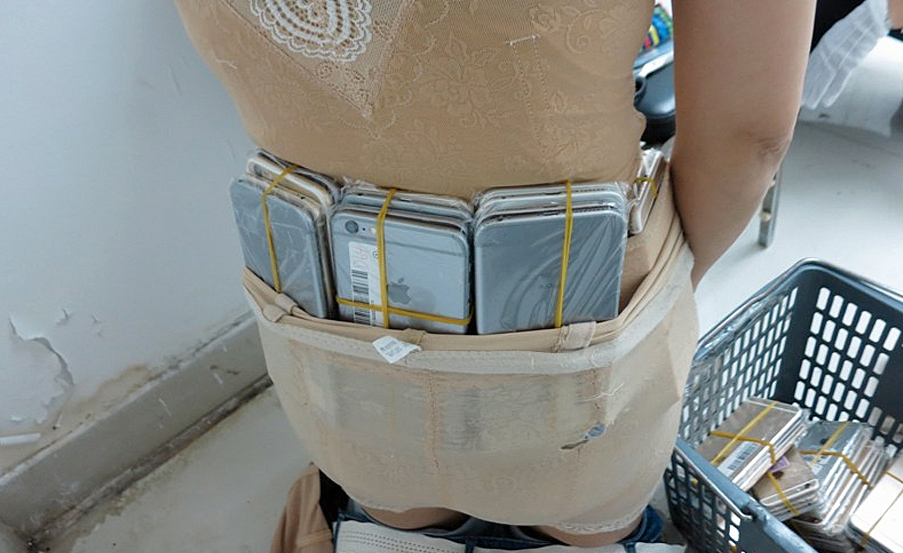 Getting a single smartphone through a metal detector at a customs gate is virtually impossible — they’re built specifically to spot such items, after all — so anyone attempting to sneak 102 iPhones through a security checkpoint is obviously going to have a pretty bad time. That’s exactly what happened to one unlucky smuggler in Shenzhen, China, and according to the reports of her arrest, she wasn’t exactly all that hard to spot.

The petite woman initially stood out to customs officials because while her face, arms, and legs suggested she had a rather slim build, her torso was extremely bulky and covered in a thick sweater. Then, when she stepped through the metal detector, it was clear that she was concealing something.

That something, as it turns out, was 102 iPhones neatly arranged and strapped tightly to her torso and around her waist. Along with the highly sought-after smartphones, the woman also had 15 high-end luxury watches tucked away on her person. The entire haul weighed over 44 pounds.

The woman had come from Hong Kong, where iPhones can be bought and then flipped in Shenzhen for a sizable profit. This smuggling gold rush has prompted many individuals to risk the chances of getting caught, and this “female ‘Iron Man'” as she has been dubbed by law enforcement is hardly the first to be nabbed with a ridiculous number of iPhones. In 2015, two men who were caught months apart had attempted to smuggle 94 iPhones and a whopping 146 iPhones. As for this latest bandit, customs officials are working with local authorities to hash out the charges.