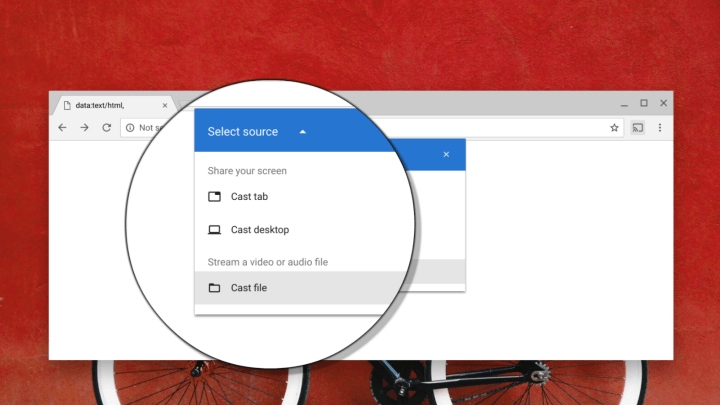 Google has announced that a long-awaited feature is finally coming to the Chrome browser: A built-in, simple way to cast videos you have saved on your PC to your desktop. The functionality has been available through paid browser extensions for a while, but adding the feature natively will take Chromecast one step closer to being a true wireless display extender.

More importantly, it makes life five times easier for anyone who torrents videos and doesn’t feel like plugging their laptop in to the TV to watch with an HDMI cable, 2014-style.

Chromium Evangelist François Beaufort revealed (spotted by Engadget)that the feature is available for select users on the Chrome beta channel right now, but anyone on the beta can force the feature to reveal itself. If you’re one of the lucky few, you’ll see a new “cast file” option below “cast tab” or “cast desktop” in the Cast menu of Chrome:

You can try it if you’re lucky* in Beta channel by following these steps: Click “Cast…” (or the Cast icon) in the browser menu, click down arrow ▼ next to “Cast to”, and “Cast file” to select the local file on your machine you want to stream. And that’s all!

This kind of local file casting has been available in the past, but only using third-party extensions for Chrome like Videostream. Wirelessly casting video is a tricky business, since Chromecast only works with certain types of video encoding, but Google addressing the problem will likely make the process more efficient. Native file casting is also coming to popular video app VLC in the near future, so you shouldn’t have any problems wirelessly casting any more.