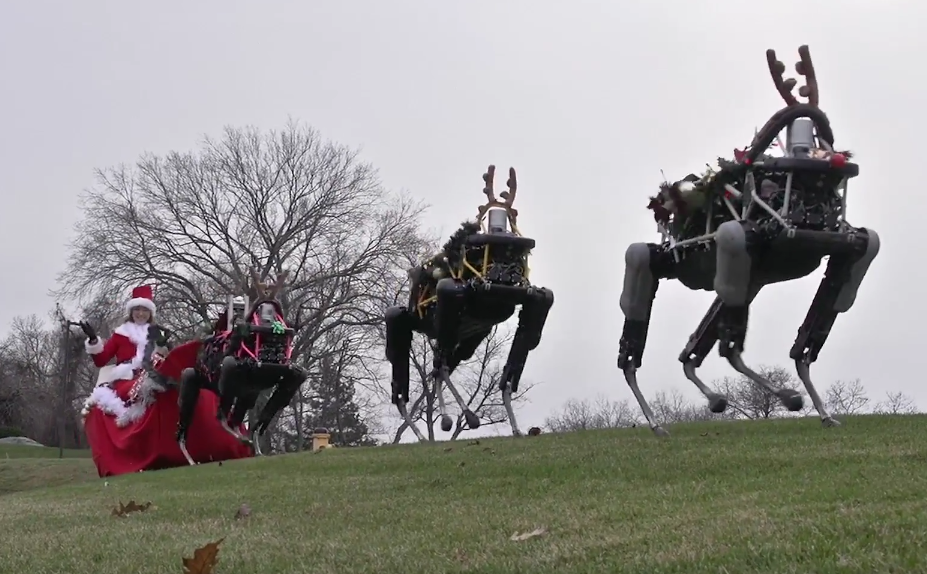 Google in recent years has bought up a lot of different robotics firms and one of the most impressive of the bunch is Boston Dynamics, which has made a name for itself developing powerful robots that are capable of navigating over rough terrain and could thus be used in ground-based military operations. The company this week sent out a Christmas greeting video that features three of its trademark four-legged robots dressed in reindeer garb dragging a sleigh holding a woman dressed as Santa Claus across the grass.

Here is the video in question:

Boston Dynamics has in the past wowed us with four-legged robots such as its Big Dog robot that is designed to maintain its balance on rough terrains even when it gets shoved, as well as its Cheetah robot that can run a maximum speed of 28.3 miles per hour, which just happens to be a little faster than Olympic sprinter Usain Bolt runs on his best day.

As you can imagine, these robots are causing quite the reaction across the Internet — witness this Reddit thread where the most highly voted comment is “Ah, Rudolph’s long lost cousins Seeker, Finder, and Destroyer.”

But personally, I think this is the cutest and least intimidating video I’ve seen of Boston Dynamics’ robots so far, although that might just be because all the other Boston Dynamics robot videos I’ve seen fill me with dread about future robopocalypse.