Late last year, AT&T announced that it was working on a new feature called “Stream Saver.” Seemingly inspired by T-Mobile’s “Binge On” initiative, Stream Saver would throttle video streams over cellular data connections to AT&T mobile devices, thus limiting the amount of bandwidth used by these video streams. The key difference between Stream Saver and Binge On is the very nature of each product — the data used up by throttled video streamed to T-Mobile devices doesn’t apply toward the subscriber’s monthly data bucket, while that isn’t the case with AT&T. Instead, stream saver is only meant to give subscribers the opportunity to conserve data.

Stream Saver is a nice option to have in your pocket if you’re nearing your data cap but you still want to stream videos, but there is one problem: it’s enabled by default. This isn’t exactly a surprise since AT&T said it would be the case, but the majority of users likely have no idea that their video is about to be throttled now that this feature has begun to roll out. Luckily, disabling Stream Saver is very easy, and we’ll show you exactly how to do it in this post. 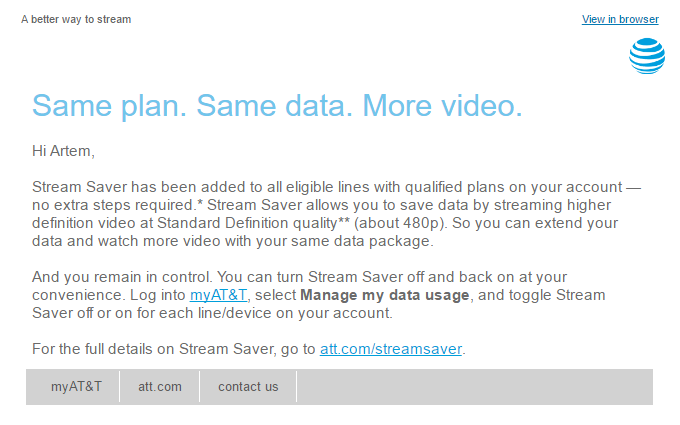 The image above was posted this past Friday by Android Police, and it shows a note received by an AT&T subscriber who has had Stream Saver enabled on his account. As stated in the notice, Stream Saver reduced video streams over AT&T’s cellular network to 480p “so you can extend your data and watch more video with your same data package.” Many subscribers are willing to watch low-quality video in order to save those precious bits, but others would rather maintain better video quality.

Disabling Stream Saver on your account is quite simple. Just visit this page on the AT&T website once you’re logged in, and you’ll see new toggles next to each line on your account that are labeled “Stream Saver.” Leave the toggles switched to “On” for any lines you want the feature to be active on, or click them to “Off” for any lines you don’t want to be throttled.