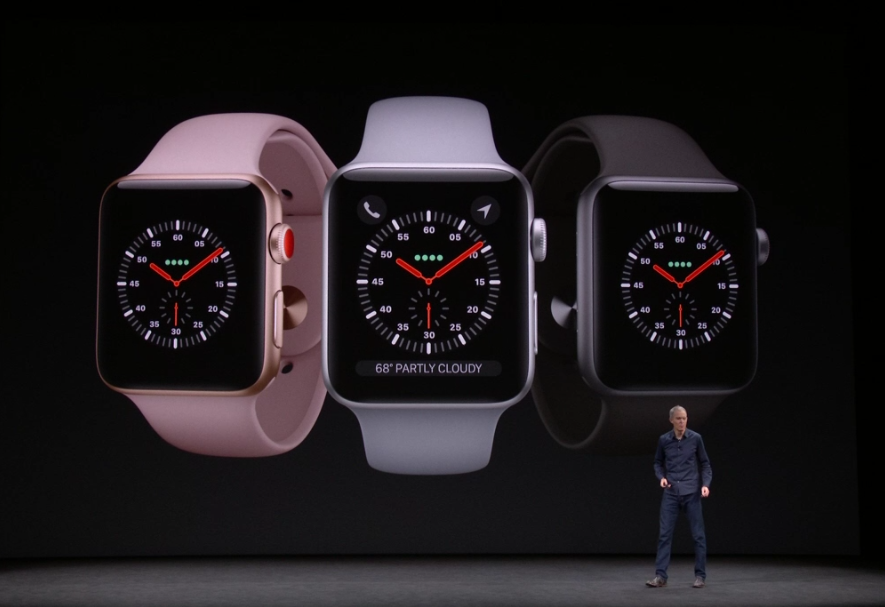 The wait is over. After months of anticipation, the 10th anniversary iPhone event has begun at the Steve Jobs Theater, one of the centerpieces of the new Apple Park. But before we get to the phones, Apple has a few other reveals to make. To start, Apple COO Jeff Williams has taken the stage to introduce Apple Watch Series 3.

Before getting to the new hardware, Williams walked us through some of the exciting new features of watchOS 4. Announced back at WWDC 2017 this summer, the new software features smart activity coaching, a redesign workout app, new features for swimmers, and the heart rate app now shows up on the watch face.

But the real story here is Apple Watch Series 3, which is the first line of Apple Watch devices to feature built-in cellular. Your contacts can reach you on your Apple Watch with the same number they call or text to get you on your phone. Cellular support also means you can stream music over the Apple Watch.

While Series 3 looks virtually the same as previous models, the new Watch is more powerful than previous models. Apple says that Series 3 features a dual-core processor as well as a new W2 chip for Bluetooth and Wi-Fi. Siri is faster and can now actually talk back at you from the watch. Wi-Fi is 85% faster and Apple has added an altimeter too, in case you need to know how high up you are.

Of course, in order for cellular to work on a watch, it needs an antenna. Apple explains that the display of the Series 3 Apple Watch is the antenna, while a tiny electronic SIM has been integrated into the device. As always, Series 3 will come with a wide variety of cases and bands so that everyone will be able to personalize their new Apple Watch. There are new Hermès bands, new Nike Plus bands, a space grey band and more.

And you won’t have to wait long to get your hands on Series 3 — the new watches will be available to preorder on September 15th and will begin shipping to consumers on September 22nd. Prices will start at $329 for the standard model and $399 for the cellular model. Apple has also dropped the price of Apple Watch Series 1 to $249, while Series 2 appears to have vanished altogether.