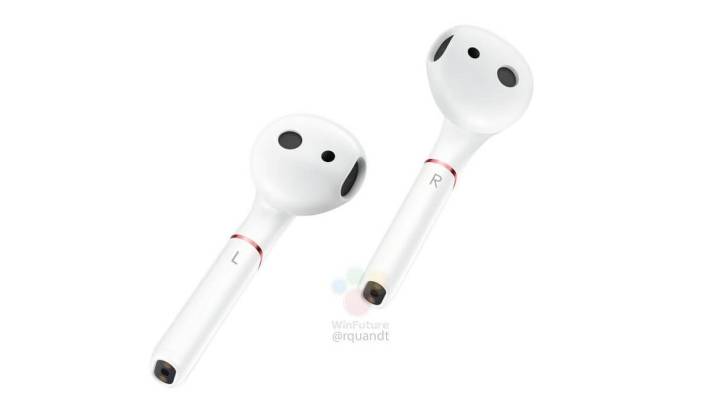 Unfortunately, wireless charging is a sore spot for Apple right now. The AirPower wireless charger, which it unveiled last fall alongside the iPhone X, is still nowhere to be seen, and the company has been scrubbing references to it from its website. Basically, if you want a new wireless charging thing right now, you’re going to need to go somewhere other than Apple — and Huawei wants to be that somewhere.

Yep, this is the Mate 20 Pro in a marketing shot for the new Huawei Freebuds 2 Pro. It isn't as big as we all thought – under 150mm length. Oh, also, Huaweis new wireless charger is in this pic too. More here: https://t.co/XGKV1n1f6o pic.twitter.com/8mf9jW21C0

In more images, he shows off the Freebuds 2 Pro, which look like a nearly perfect AirPods knockoff. According to Quandt, the Freebuds have three hours of listening, extended to 20 hours with charges from the case, just like the AirPods.

Unlike the AirPods, however, it seems that the Freebuds 2 Pro case has Qi wireless charging built in, as demonstrated in the image. More…usefully, the case can also be charged wirelessly from the Huawei Mate 20 Pro smartphone, if you desperately need more juice while on the go. The case can also charge via USB-C if you prefer.

A few more images of the Mate 20 Pro also leaked out, which show a design that can best be described as “Samsung Note 9 but with a notch.” Huawei is holding a launch event on October 16th, so we’ll get a full look at the new devices then.