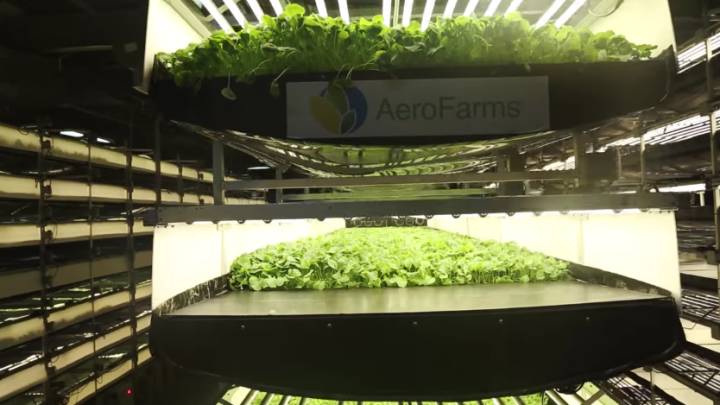 With less available land and more people to feed each year, we have a real problem on our hands, whether or not we all choose to acknowledge it. However, some people are already considering ways to fix it, and one of the most viable solutions is to build massive vertical farms that require no soil, use water efficiently, and replace the sun with LED lighting to grow fresh produce.

The biggest vertical farm in the world is currently under construction in New Jersey, and it will produce some 2 million pounds of lettuce and other leafy greens per year once it’s completed.

AeroFarm already operates one such farm and the results have been extraordinary. The facility is able to grow vegetables indoors without requiring fertile soil or any sunlight at all. These crops consume less water as well, since the system uses a root-misting nutrition and oxygenation procedure that needs 95% less water than a regular field.

Also of note, crops can be grown all year long, and they grow at faster rates than on a typical farm.

AeroFarm is building a massive farm in a 70,000-square-foot space in New Jersey that used to be a steel mill, Gizmodo reports. Once completed, the new farm will deliver up to 2 million pounds of leafy green produce each year.

A company has been taking the same approach to modern farming in Japan. A company called Mirai has a 25,000 square feet vertical garden which used to be the world’s largest, capable of harvesting about 10,000 heads of fresh lettuce a day, according to a July 2014 report from National Geographic.

As these new farming solutions become more popular among farmers, we can expect other products to grow inside vertical farms. Mirai chose to focus on leafy green produce because this type of approach makes the “most economic sense” since these are “fast-growing vegetables that can be sent to market quickly.” However, the same methods used to grow lettuce in vertical farms can be adapted to any plant, according to the company.