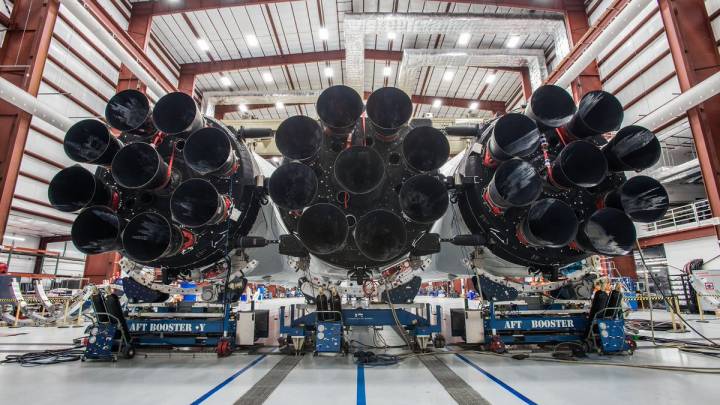 All things considered, SpaceX has had a very, very good year. The company has tallied many successful launches and returned much of its reusable hardware back to Earth without issue, and its resupply runs to the International Space Station have become regular events. To start 2018, the startup will be facing its biggest challenge yet — launching the incredibly powerful Falcon Heavy into space for the very first time — and Elon Musk just tweeted out some new photos of the craft to help remind everyone how awesome it is.

The photos show off the massive rocket in all its glory, still under construction ahead of its maiden voyage skyward. The vehicle, which will be the most powerful working rocket on the planet if all goes according to plan, is built on the company’s Falcon 9 rocket platform. Two Falcon 9 rockets serve as first-stage boosters, and the central unit is also built on the same nine-engine configuration. All 27 of those engines need to light up in harmony for the Falcon Heavy to succeed.

Falcon Heavy at the Cape pic.twitter.com/hizfDVsU7X

The Falcon Heavy’s first flight, which Musk himself claims will include one of his own personal Teslas as a mock payload, will really be an incredible test of SpaceX’s know-how. Musk has previously said that engineering the rocket was a massive challenge with many pitfalls and problems, and that the team didn’t really know what they were getting into when they began it.

Musk is, of course, hoping that the rockets light perfectly, sail skyward, and that the Falcon Heavy completes its ascent and descent without issue, but he’s also being as pragmatic as possible.

“There’s a lot of risk associated with the Falcon Heavy, a real good chance that vehicle does not make it to orbit,” Musk said earlier this year at the 2017 International Space Station Research and Development conference. “I hope it makes it far enough away from the pad that it doesn’t cause pad damage. I would consider even that a win, to be honest.”

That might sound a bit pessimistic, but SpaceX is no stranger to failure. The company has lost many, many of its vehicles in the past, and it’s clear that Musk is setting his own expectations accordingly.