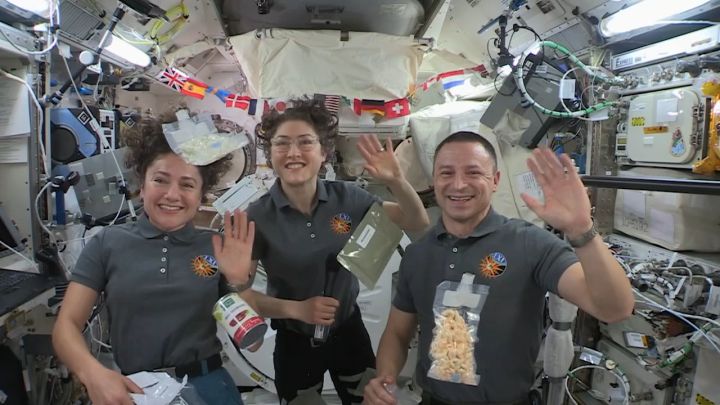 For most of us here on Earth, Thanksgiving is an opportunity to forget about our jobs for a moment and enjoy some good food with friends and family. Astronauts aboard the International Space Station can’t exactly pause their work to celebrate with relatives, but that doesn’t keep them from observing the holiday in their own unique way.

In a new video released by NASA, astronauts Christina Koch, Jessica Meir, and Andrew Morgan talk about the Thanksgiving traditions they’ve celebrated all their lives. They also offer us a brief look at what they’ll be feasting on during their holiday in space. Spoiler: It’s in bags.

Of all the technology that has improved by leaps and bounds in the decades since humans first traveled into space, the food situation remains somewhat primitive. Everything is sealed up tight in small bags and cans, and that includes Thanksgiving dinner.

On offer this year are potatoes, green beans, sweet potatoes, macaroni and cheese, and cornbread dressing, which Meir suggests the crew could use as a stand-in for stuffing. As for the main course, the crew will be feasting on “smoked turkey in a pouch,” as Morgan puts it. Woof.

To wrap up the meal, the crew has pouches of what Koch describes as “cran-apple dessert,” though she suggests it may be possible to make a pumpkin pie-esque dessert using some cookies and candied yams. It all sounds pretty good. That is, as long as you’re willing to ignore the last food item that Andrew Morgan shows off, which happens to be a rare can of cranberry sauce. Gross.

Joking aside, it’s pretty cool that NASA’s high-flying scientists will have a chance to enjoy the holiday along with the rest of us, even if they have to do so “at the office,” so to speak.