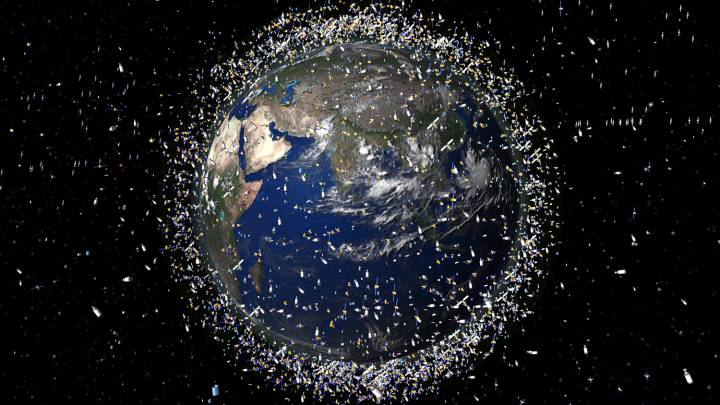 In case you haven’t heard, space junk is an increasingly serious problem for our planet. The International Space Station has been forced to take steps to protect itself from floating debris, while China is dreaming of a day when it can zap orbiting litter out of the sky using lasers. Now, Airbus is testing its own method of dealing with the largest chunks of space junk: a massive harpoon.

As BBC reports, the company’s plan is a two-part system. First, a nimble “chase vehicle” spacecraft would be launched into orbit in search of debris such as defunct satellites. Then, the chase craft would launch its powerful harpoon towards the object, piercing its metal hull and securing it with strong barbs that grab the edges of the new opening and pull it back towards the spacecraft. The craft then uses its thrusters to enter a rapidly decaying orbit, eventually diving into Earth’s atmosphere, incinerating and destroying the debris.

You obviously can’t see it when you gaze up at the night sky, but Earth has a whole lot of junk floating around in orbit. There’s all kinds of reasons why debris ends up orbiting Earth, and many of the objects are discarded pieces of other spacecraft or long-dead satellites which have no use to anyone. Sometimes these objects crash into each other and create even more, smaller pieces of space junk which can damage active satellites and even pose a danger to astronauts. The very first test of the new technology will take place in April, when the RemoveDebris mission tests a couple of debris removal options after it reaches orbit. The harpoon will be a smaller version of the real deal, meant to gauge its usefulness. Ideally, if all goes well, it won’t be long before the larger harpoon is put into service and can begin clearing Earth’s orbit of pesky litter.