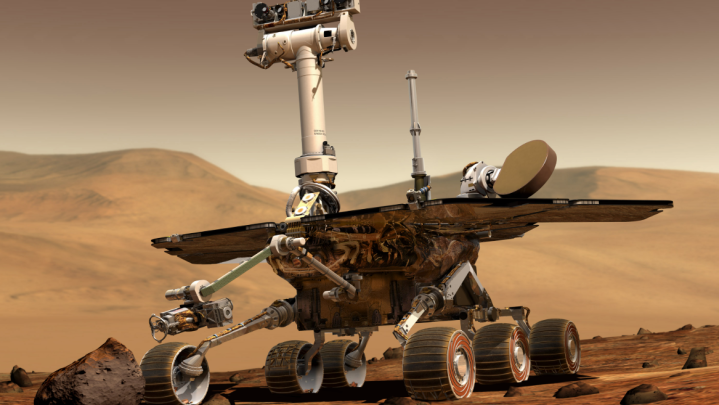 When you get caught in a storm here on Earth you just find shelter for a little while and let it pass, but things are a whole lot different on Mars. It’s now been three weeks since the massive dust storm on Mars has swallowed up NASA’s aging Opportunity rover, and scientists have absolutely no idea when the bot will wake back up or what condition it will be in when it finally does.

The rover has gotten the worst of this planet-wide storm, and since it’s located in an area that was one of the first to be shrouded in the dense dust clouds it’s solar panels have been unable to capture energy-giving light for a while now. And so the rover sits in silence, unable to speak to its handlers back home and without enough power to do any actual work. So what’s next?

Dr. James Rice, co-investigator and geology team leader on the NASA project that includes Opportunity, recent gave a brief update on Opportunity’s status, as well as an interesting glimpse into what things were like for the rover just before it shut down:

We went from generating a healthy 645 watt-hours on June 1 to an unheard of, life-threatening, low just about one week later. Our last power reading on June 10 was only 22 watt hours the lowest we have ever seen. The primary concern is that we will not have enough power to keep us warm enough to prevent any damage to the vehicle’s electronics. However, our thermal experts think that we will stay above those low critical temperatures because we have a Warm Electronics Box (WEB) that is well insulated. So we are not expecting any thermal damage to the batteries or computer systems. Fortunately for us it is also the Martian Spring and the dust, while hindering our solar power in the day, helps keep us warmer at night.

Rice also brushes off concerns that the storm will ultimately claim Opportunity’s life, saying that it is “far from dead” and that the rover’s longevity should be all the proof anyone needs to believe that it will emerge from the dire situation intact.

He’s certainly right about that last point. Opportunity’s original mission was planned to last just 90 days from its landing date back in 2004, but it has somehow stretched that to over 14 years, continuing to add scientific objectives to its already impressive list of achievements. Let’s all just keep our fingers crossed that its incredible run doesn’t end here.