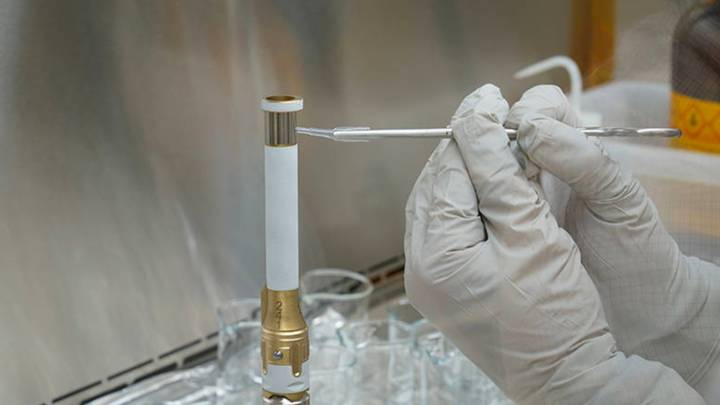 NASA’s Perseverance rover is currently headed to Mars. It’s been speeding through space for months and is slated to arrive on the planet on February 18th, landing in the Jezero Crater where the rover will begin its years-long journey of science and discovery. The rover will never leave Mars, and when it finally exhausts itself the Red Planet will be its grave.

However, the fact that the rover itself will never leave Mars doesn’t mean that everything NASA sent along on the mission is going to remain there forever. In fact, one of the mission’s major objectives is to collect material and samples from Mars, seal them, and prepare them for their journey back to Earth at a later date.

The Perseverance rover is carrying plenty of sample collection tubes with it to Mars. In fact, a total of 43 sample tubes are on their way to the Red Planet as we speak. They’re perfectly sterile inside and designed to hold material that is taken both from the surface and from drilled sample sites.

“[The tubes] are less than 6 inches [15.2 centimeters] long, but we still found over 60 different dimensions to scrutinize,” Pavlina Karafillis of NASA’s Jet Propulsion Laboratory said in a statement. “Because of the intricacies of all the complex mechanisms they will pass through during the Mars Sample Return campaign, if any measurement was off by about the thickness of a human hair, the tube was deemed not suitable for flight.”

Perhaps most interesting is that the rover won’t actually hang on to the sample tubes after it fills them. Instead, once the tube is filled and sealed it will be dropped on the surface of the planet, and its location marked for the future. There’s no date for the future mission, but the idea is that a “fetch” rover will eventually be sent to the planet to collect the tubes wherever they ended up.

The tubes will then be transported to an ascent vehicle that sends the tubes and the sample return container into orbit around Mars. Then, an orbiter will intercept the sample tubes and then carry them back to Earth, which will take months. If this sounds familiar, it’s because it’s basically the same set of steps that China recently went through to collect material from the surface of the Moon and return it to Earth.

We’re still not sure exactly when humans will finally be able to study Mars material up close and in person, but the groundwork is about to be laid, and that’s pretty darn exciting.