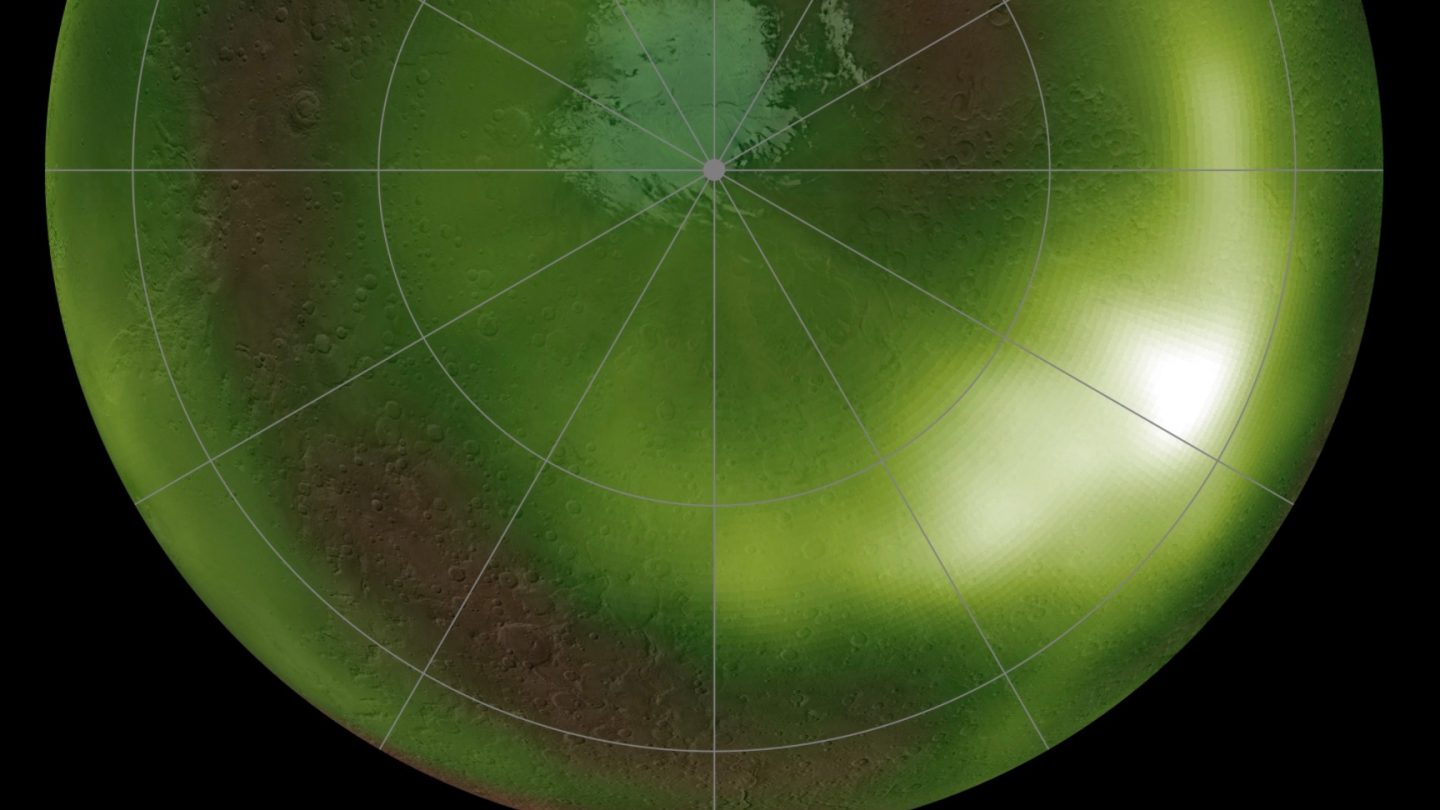 On Earth, the Northern (or Southern) Lights are a phenomenon that is quite familiar to those that live far enough from the equator to see them. They’re a pleasant glow that twists and twirls in various colors during certain times of the year based on atmospheric conditions. As it turns out, the night sky on Mars glows, too, but we wouldn’t be able to see if we were merely standing on the surface.

As NASA’s MAVEN spacecraft has discovered, seasonal changes bring an ultraviolet glow to the night side of Mars, and while it’s not exactly like the auroras we see on Earth, it’s still incredibly interesting.

The phenomenon, which scientists call a “nightglow,” has some strange quirks. For example, the MAVEN team observing the glow found that the atmosphere produces three pulses of ultraviolet radiation per night — no more and no less — and it only does so during the spring and fall seasons on Mars. That’s some pretty bizarre behavior, but the researchers think they may have an idea of what’s going on.

In a new paper published in the Journal of Geophysical Research: Space Physics, scientists using the MAVEN data suggest that winds are sparking chemical reactions in the atmosphere and leading to the blooming ultraviolet light. Vertical winds pushing parts of the upper atmosphere down may be “speeding up the chemical reactions that create nitric oxide,” the team believes.

“The ultraviolet glow comes mostly from an altitude of about 70 kilometers (approximately 40 miles), with the brightest spot about a thousand kilometers (approximately 600 miles) across, and is as bright in the ultraviolet as Earth’s northern lights,” Zac Milby, co-author of the research, said in a statement. “Unfortunately, the composition of Mars’ atmosphere means that these bright spots emit no light at visible wavelengths that would allow them to be seen by future Mars astronauts. Too bad: the bright patches would intensify overhead every night after sunset, and drift across the sky at 300 kilometers per hour (about 180 miles per hour).”

NASA’s MAVEN — which stands for Mars Atmospheric and Volatile Evolution — spacecraft was originally launched back in 2013. It arrived at Mars in late 2014 and began orbiting the planet and returning observations from its sky-high vantage point. It was originally expected to last one year, but it proved that it had plenty of life left after its primary mission and its life has been extended indefinitely. The spacecraft also functions as a relay for communications between Earth and other NASA hardware on Mars.