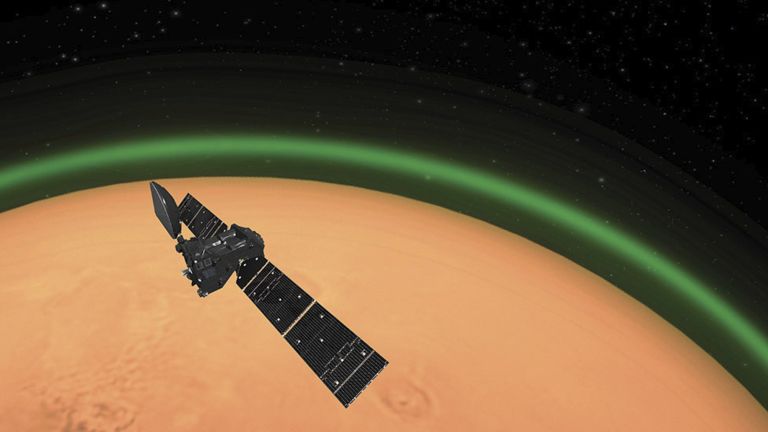 Mars is known as the Red Planet due to its coppery hue. It’s a dry, dusty, windy place, but that wasn’t always the case. The planet was once very, very wet, with vast rivers and lakes dotting its surface. If life took root there in the distant past, it may have even been green with life.

Researchers writing in the journal Nature Astronomy report that Mars is once again green, but not because it’s suddenly sprouted lush plant life. It’s actually the thin atmosphere of the planet that has taken on a green glow as observed by the Trace Gas Orbiter which currently calls Mars home.

Residents of certain parts of planet Earth are occasionally treated to some pretty spectacular light shows in the night sky. The Northern Lights (or Southern Lights, depending on which end of the globe you’re on), are a well-known and often-studied phenomenon. On Earth, the streaks of green, blue, and other colors in the sky are a byproduct of our planet’s magnetic field channeling energized particles.

The glow that the TGO is seeing on Mars is an entirely different phenomenon, but it’s not unique to the Red Planet. Mars doesn’t have a strong magnetic field like Earth does, but it does have oxygen in its atmosphere. Those oxygen atoms get charged up by sunlight and then when they relax, they glow a pale shade of green.

Astronauts have observed this happening around Earth, and to see it on Mars isn’t necessarily surprising, but it does offer researchers some information about the planet’s atmosphere.

“By looking at the altitudes of where this emission is, you can actually tell the thickness of the atmosphere and how it’s varying,” Dr. Manish Patel, co-author of the study, said in a statement. “So, if you were to keep observing this phenomenon, you could see the height of the atmosphere change, something it does for example when it heats up during dust storms. This is an issue we face when we try to land on Mars because we’re never quite sure just how thick the atmosphere will be when we plough through it to get to the surface.”

Knowing the position and thickness of the atmosphere is important when you’re traveling to a new world, as it affects the angle of approach that a spacecraft would need to take to avoid damage or skipping off into space. NASA and other space agencies have already made it clear that they plan on sending humans to Mars in the not-so-distant future, so this information could come in handy.