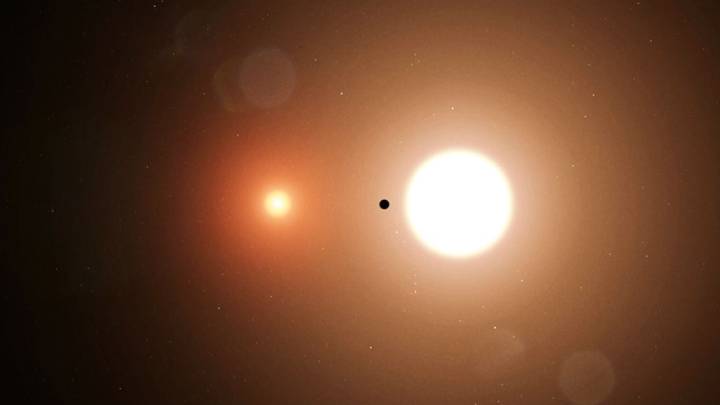 I don’t know about you, but when I was 17 years old, I wasn’t doing very much planet-hunting. Wolf Cukier of Scarsdale High School is different. Not only was he accepted as an intern at NASA’s Goddard Space Flight Center after his junior year, but he also managed to make a name for himself just three days into his NASA work by spotting a planet that nobody ever even knew existed.

What’s even more incredible is that this new world is unlike any that astronomers have ever seen. It’s orbiting not one, but two stars at the same time.

For Cukier’s internship, he was tasked with scouring data gathered by NASA’s TESS, or Transiting Exoplanet Survey Satellite. This high-tech planet-hunter seeks out planets by detecting subtle dips in the brightness of the stars they are orbiting. Cukier was studying a dual-star system known as TOI 1338 when he noticed something odd.

“I was looking through the data for everything the volunteers had flagged as an eclipsing binary, a system where two stars circle around each other and from our view eclipse each other every orbit,” Cukier explains in a post on NASA’s website. “About three days into my internship, I saw a signal from a system called TOI 1338. At first, I thought it was a stellar eclipse, but the timing was wrong. It turned out to be a planet.”

The planet, which has since been designated TOI 1338 b, is roughly the size of Saturn, according to NASA. It completes an orbit of the central binary every 93 to 95 days. This irregular transit period is due to the fact that the planet is orbiting two stars that are orbiting each other.

The system is situated some 1,300 light-years from Earth, so we obviously won’t be visiting this very special planet any time soon. Still, it’s an incredible discovery and one heck of a way to kick off a career in science for Cukier.