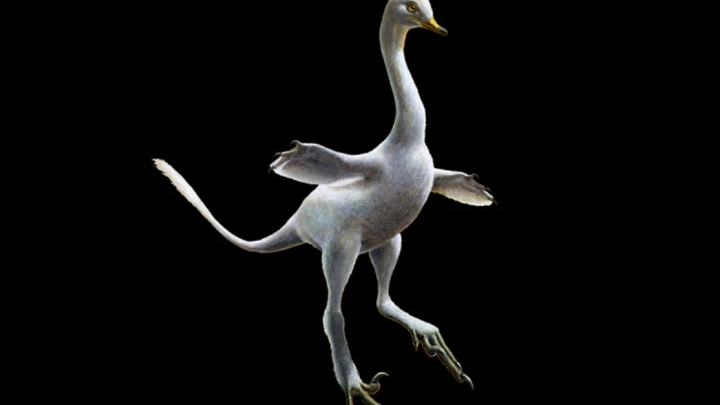 When you hear the word “dinosaur” you mind probably paints a picture of the mighty tyrannosaurus or something similar, but not all of the long-lost creatures looked like oversized lizards — in fact, some of them just looked weird. A newly revealed duck-like dinosaur called Halszkaraptor escuilliei is one of the more peculiar creatures that lived tens of millions of years ago, and newly published research reveals just how odd it really was.

The dinosaur, which is thought to have lived around 75 millions years ago near what is currently Mongolia, looks like a cross between a duck and a swan, but came equipped with devastating claws and a beak that was lined with sharp teeth. Needless to say, you wouldn’t have wanted to meet this thing in person.

The ancient creature, which is called “Halszka” for short, is so unusual that when paleontologists discovered its long-fossilized remains they had to ask themselves if it was even real. “I asked myself, ‘Is this a real, natural skeleton, or an artifact, a chimera? If this is a fake, how could I demonstrate it?'” lead author Andrea Cau, an Italian paleontologist explains. “Assuming it was a fake instead of starting assuming that the fossil is genuine was the most appropriate way to start the investigation of such a bizarre fossil.”

The animal would have been quite adept at swimming, with webbed feet that would have allowed it to push itself across the water with ease, and its long neck gave it the appearance of a swan. However, unlike a swan, the ends of its flipper-shaped “wings” and feet were equipped with sharp claws for dispatching prey. Likewise, its duck-like bill was lined with teeth meant for shredding meat.

Scientists believe that the dinosaur would likely have been comfortable hunting both on land and on the water’s surface, making it a particularly versatile carnivore. It’s certainly a strange animal, but seems to support the largely accepted theory that dinosaurs have more in common with modern day birds than with any other animal. The full research paper was published in the journal Nature, and offers some interesting insight into where Halzka fits in the dinosaur evolutionary saga, as well as how the animal relates to modern day waterfowl.