Coronavirus update: Here’s the latest data on when the worst will hit your area

This week is already proving to be one of the weirdest ones yet in the slow-rolling, deadly saga of the coronavirus pandemic that’s kneecapped daily life in the US like few catastrophes that have come before. Deaths and hospitalizations are still continuing their slow, steady rise in some states. Governors of some states are trying to formalize a process around deciding how to reopen their economies, while the CDC and FEMA have drafted a reopening blueprint of their own for the whole country. Meantime, President Trump on Monday claimed the decision was his, and that he has “total” authority as president. And down in Florida, Gov. Ron DeSantis, who’s drawn fire for moving too slowly in responding to the crisis in his state, has also raised eyebrows for trying to describe the WWE as an essential business.

In the real world, though? Most states still haven’t even hit their peak of hospitalizations and deaths from the coronavirus yet. We know that, because the latest modeling gives a pretty good indication of how soon you can expect the worst of the crisis to hit in your area.

Researchers from the University of Washington’s Institute for Health Metrics have built a predictive tool that forecasts when every state will hit its peak in terms of hospital use and resources hitting its max, as well as when deaths from the virus will peak in the state. As of now, the data is current through Monday (and the site gets updated regularly), and the site is pretty easy to navigate — all you have to do is plug wherever you want to see into the box near the top of the page, and that’s it.

For example, here’s what the model shows regarding the point at which deaths should peak in the US from the virus (incidentally, this data shows that point came on Monday of this week): 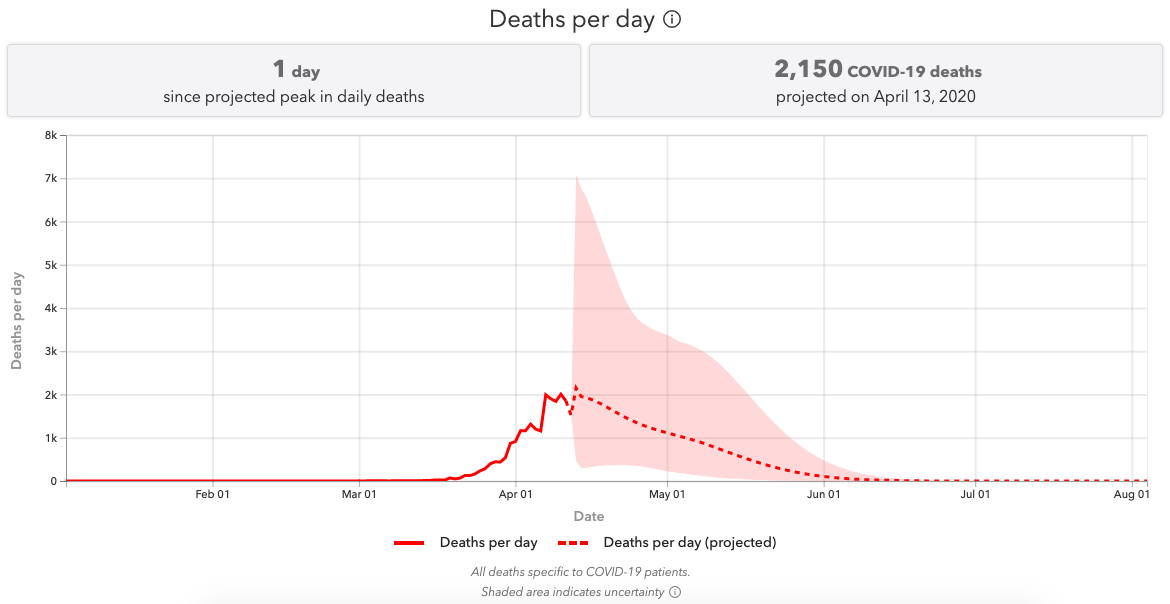 There’s a wide range of peak dates shown, depending on which state you plug into the website. Which should come as no surprise, since not every state was hit with coronavirus cases to the same degree and at the same time. Also, states attacked the problem locally within a range of aggressive mitigation tactics. Some hit hard and early; others waited, and wound up striking much later.

Another thing to note about these models at the site, which you can check out yourself, has to do with the site’s definition of a peak. That occurs once there’s been a consistent downward trend in the numbers — meaning, a state could reach a record number of deaths, drop a little to plateau off for a bit, and then start a steady slide downward. The start of that steady slide downward would represent the peak.

This site is also useful for getting a look at other aspects of the coronavirus response in a given area. Plug in “New York,” for example (which became the epicenter of the virus in the US and which surpassed 10,000 COVID-19 coronavirus deaths this week), and you can see displayed above the various charts a rundown of different steps the state took in response to the virus, such as when a stay-at-home order was issued (March 22), when educational facilities were closed (March 18), and when non-essential services were closed (March 22).

Tweet
Here’s what Hubble was looking at on your birthday