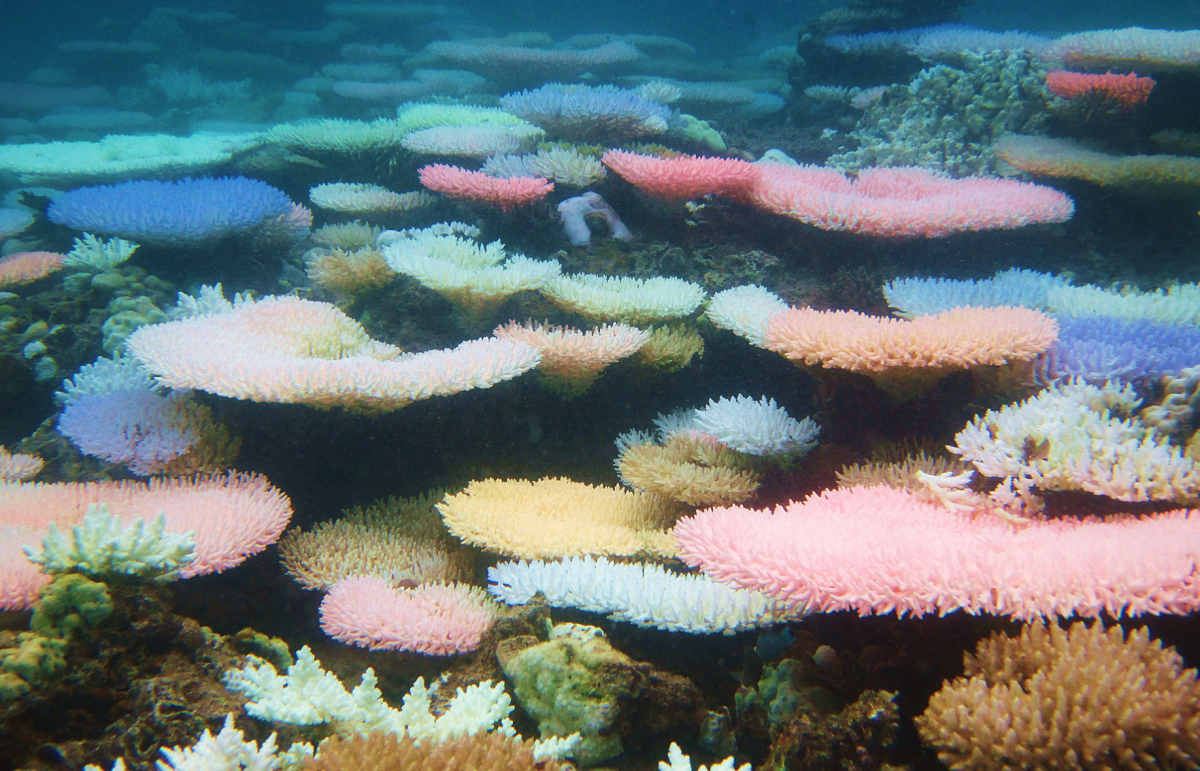 Coral bleaching can be devastating to a reef system. It happens when ocean water waters get too warm, prompting the corals to lose the algae that gives them much of their color. Humans are largely to blame for this, as warming ocean temperatures have been directly linked to global warming and mankind’s impact on the climate, but I digress.

As scientists have studied coral bleaching over the years, keeping track of how much damage is done to reef systems large and small and monitoring their recovery, they’ve noticed something odd. Sometimes, a reef system that suffers bleaching doesn’t turn a ghostly white like it normally would. Sometimes it looks like it was covered in various shades of neon highlighter. But why?

As researchers Jörg Wiedenmann and Cecilia D’Angelo write in The Conversation, it seems that some coral have a very colorful way of protecting themselves speeding up their recovery once ocean waters return to normal temperatures.

Their research began by attempting to determine why only some coral reefs became colorful during a bleaching episode while others turned pale. The conducted trials to see if they could replicate the phenomenon in a controlled setting but initially came up empty-handed. It wasn’t until the scientists considered what was happening inside the stress-out coral that they found their answer.

“In healthy corals, much of the sunlight is absorbed by the photosynthetic pigments of the algae,” the researchers explain. “When corals lose their algae due to stress, the excess light travels back and forth inside the coral tissue, reflected by the white skeleton. The algae inside coral can recover after bleaching, once conditions return to normal. But when the coral interior is lit up brightly like this, it can be very stressful for the algae, potentially delaying or even preventing their return.”

That’s bad news, as permanent bleaching leads to the degradation of the coral and can destroy reefs that protect the coastlines of continents all around the world. It’s estimated that the cost of the damage to coastal regions if we let coral reefs die off will be even greater than the money we would have to spend to ensure their survival. They’re that important.

However, if the coral suffers only mild bleaching, some species change color in an effort to encourage algae to return sooner rather than later. It appears to be something of a natural defense mechanism to rising ocean temperatures or poor water conditions, and we’re seeing it more frequently now than ever.

“If the coral cells can still carry out at least some of their normal functions during bleaching, the increased internal light levels boost the production of colourful pigments which protect the coral from light damage, forming a kind of sunscreen layer that allows algae to return,” the researchers explain. “As the recovering algae start absorbing light for photosynthesis again, light levels inside the coral drop, and so the coral stops producing as much of these colourful pigments.”