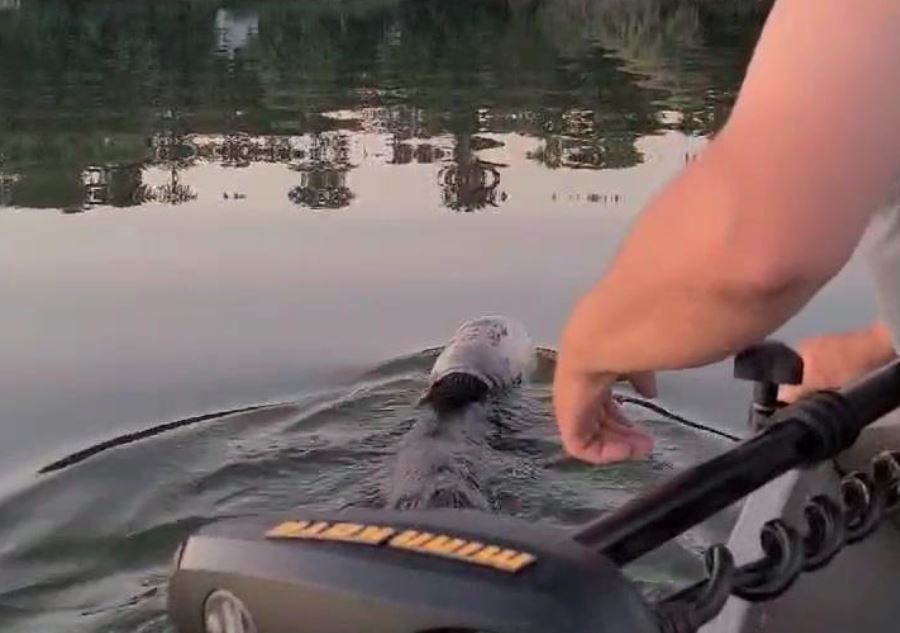 As a Wisconsinite, I’ve heard all the cheese-related jokes the world has to offer (and from most of my co-workers, no less). We’re good people up here in the frigid north, and yeah, we like cheese. What about it? So, when I tell you that this really is the most “Wisconsin” news story I think I’ve ever seen, you know I’m being honest.

As the Milwaukee Journal Sentinel reports, a family that was enjoying a day of fishing on Marsh-Miller Lake up in Chippewa County, Wisconsin, spotted what they thought was a dog swimming across the water. It turned out to be a young bear, which isn’t an uncommon sight in the North Woods of the state, but this bear was in trouble. It had found a tub of cheese puffs and gotten its head stuck inside.

Now, remember when I said we’re good people up here? Well, the Hurt family took it upon themselves to rescue the poor animal which was clearly in a dire situation. In a video of the rescue posted to Facebook you can clearly see the bear is struggling to swim with the tub on its head, and it appears that the tub itself was beginning to fill with water, making it hard for the bear to catch its breath.

Using their boat to approach the bear slowly as to not send it into even more of a panic, the family eventually got close enough so that Brian Hurt was able to reach down and release the plastic container from the bear’s noggin. The bear immediately shook itself off and continued on a much safer path to the shoreline.

There’s a really good chance the bear would have died if it hadn’t been spotted. It was clearly unable to navigate the lake and with the container filling with water it could have easily drowned. The video of the rescue is a little stressful to watch, even if you know the outcome beforehand, and it’s great to see that the bear was able to continue on and presumably made it to shore without issue.

It’s a heartwarming rescue story but it also speaks to our seemingly unstoppable waste problem. Humans are really, really good at leaving their stuff lying around, and bears are incredibly good at finding that stuff because it usually smells like food. In this case, someone’s unsecured garbage can or (even worse) litter could have resulted in the death of an innocent animal. Thankfully that didn’t happen, but it’s a timely reminder to clean up after ourselves.