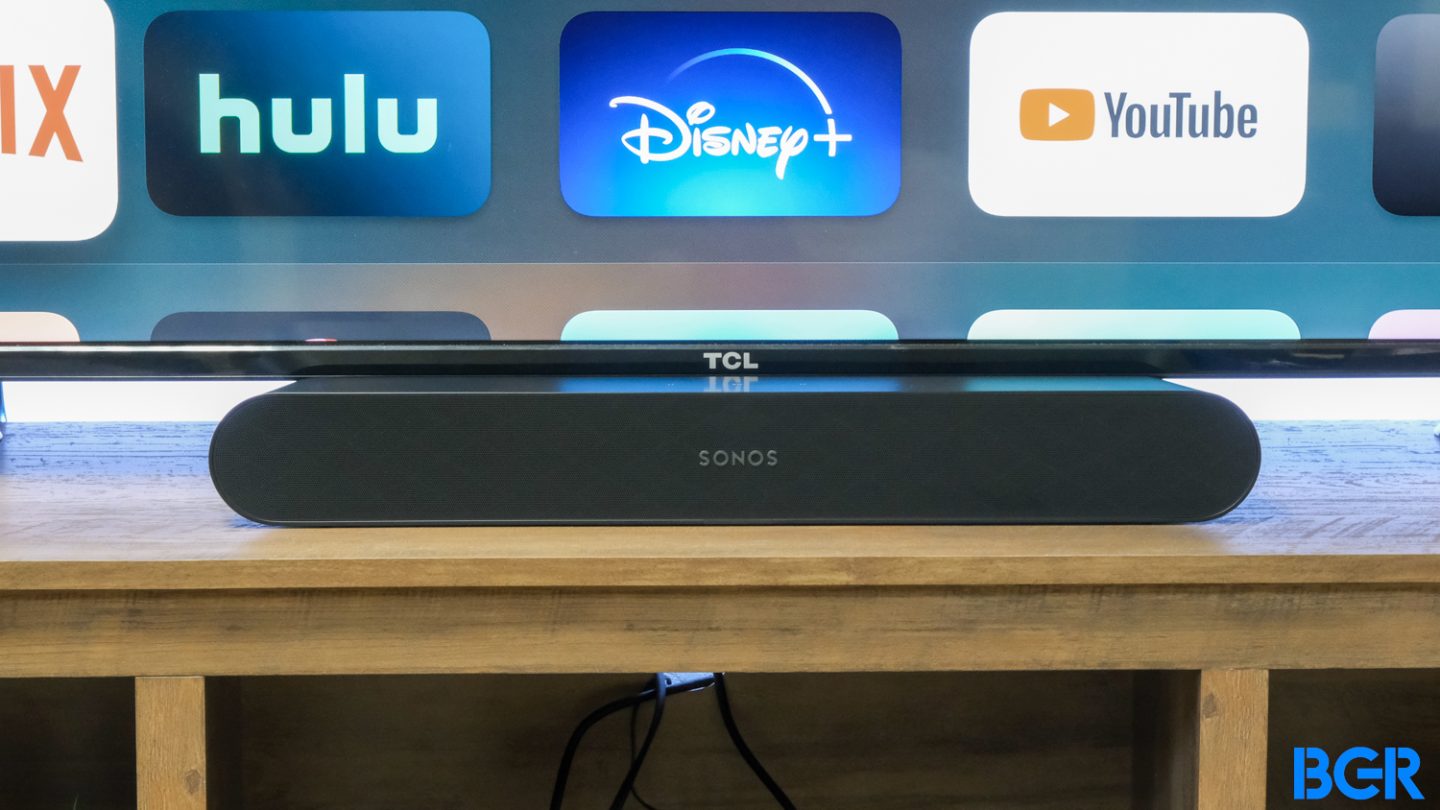 All of Sonos’ soundbar releases have been well-received. The company has managed to combine high sound quality with awesome smart features to deliver a great modern home audio experience. Add in the fact that those soundbars integrate with the rest of Sonos’ smart home products, and you have a hit on your hands. But those soundbars have also all been at least midrange, costing $449 for what was the entry-level Sonos Beam.

But now there’s a new entry-level in town, and it’s the first in Sonos’ soundbar range to be truly a budget offering. At $279, the Sonos Ray is being positioned as the soundbar for those who want an upgrade from their TV’s built-in audio, without having to shell out for it.

But, of course, to hit the lower price point Sonos has to cut some corners. Some of those are clearly to do with sound quality and sound-related features. Unlike Sonos’ other soundbars, the Ray doesn’t support Dolby Atmos. In fact, it doesn’t even have an HDMI port, which means that you have to connect it through its optical connection.

But assuming you can tolerate those compromises and could stand to save some cash, the Sonos Ray is a serious competitor. Here’s why.

The Sonos Ray is Sonos’ cheapest soundbar to date, offering a solid audio quality and some great smart features. But does Sonos cut too many corners to hit the low price? 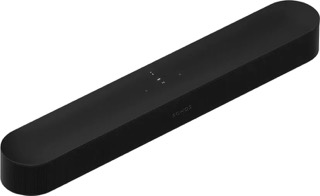 Take one look at the Sonos Ray, and you’ll recognize it as a Sonos product. It’s built from the same black or white plastic and metal as Sonos other soundbars and speakers, and looks right at home alongside the company’s other products. As mentioned, the soundbar is available in black, or white. We’re reviewing the black model, which I prefer — but the white model looks good too.

It also looks distinctly different from Sonos’ other soundbars. The most obvious thing that sets it apart is its width — the Sonos Arc is a hefty 45 inches, while the Beam is a much smaller, at 26 inches. The Ray is even smaller than that, sitting in at 22 inches. It’s not just small by Sonos standards — it’s small by soundbar standards in general. But many will appreciate the smaller profile that draws less attention to itself.

The way the soundbar is built is a little different too. The Arc and Beam both have a grille that not only covers the front, but the sides too — which helps allow those products support Dolby Atmos with up-firing and/or side-firing speakers. The Ray doesn’t have that same support — and as a result, doesn’t need a grille on the side or the top. Instead, the grille is only located at the front. I actually prefer it from a looks perspective, though of course, I’m willing to trade having a grille on the top and sides for better audio support. You may not be in the same camp.

On the back of the Sonos Ray can be found the ports that it connects with. You’ll get a power input and an ethernet port for better network connectivity, like the others. But while the others also have a HDMI port to connect to your TV’s HDMI ARC port, the Ray sticks with a lower-tech optical port. That’s the extent of the port selection on the Ray.

Generally, I quite like the overall look of the soundbar — but I wasn’t surprised to like it, as I’ve liked the design of all of Sonos’ products so far.

Setting up the Sonos Ray is as easy as setting up any other Sonos device. You’ll start by plugging it in and connecting it to your TV through an optical cable. Then, you’ll download the Sonos app if you don’t already have it, and log in to your account if you have one. Find the soundbar with the app, and register it to your account.

There aren’t too many other features you can set up with the Ray, but there is the ability to set up the device with AirPlay 2, if you’re in Apple’s ecosystem.

One feature that you can’t set up is the ability to use it with HDMI CEC. That’s the standard used by many devices to allow for one remote to control an entire home theater, and it doesn’t work here because the soundbar doesn’t work through an HDMI port. This can be a bigger issue than you might think. You can set the soundbar up to recognize commands from your TV’s infrared remote, but support for this can be a little hit or miss. For example, I was unable to get my TCL 6-Series remote to work with the feature, however, it did work with my Apple TV remote, which is the remote I use with my home theater anyway.

If you can’t get it to work, you may be a little out of luck without buying a third-party remote. Sonos doesn’t ship the Ray with a remote of its own, so if you can’t get it to accept commands from your TV remote, you’ll have to control the Ray with the Sonos app, use the controls on the soundbar itself, or buy another remote that will work with the Ray. That’s pretty annoying. And, if your TV works through Bluetooth, you’re out of luck too, as the Ray is built to accept commands through infrared. If you have a universal remote, you should be able to get it to work.

All of this could have been avoided if Sonos had just used an HDMI port instead of an optical port in the Ray. The Ray still would have differentiated itself from the Beam through things like a lack of voice assistant and Dolby Atmos. The Ray really suffers from having to rely on an optical connection.

The Sonos Ray supports some smart features, like many of Sonos’ other products. But it’s also missing many of the features that make Sonos products…well…Sonos products. That’s a little disappointing, but depending on your priorities, perhaps not a dealbreaker.

Let’s start with what the soundbar does have. As mentioned, the soundbar supports Apple’s AirPlay 2, meaning that you can use it with multi-room audio in Apple’s ecosystem without needing to use the Sonos app. It also supports Spotify Connect, so Spotify users will be able to play music to the soundbar in the Spotify app.

You can also set the Ray up to work with a Sonos subwoofer and Sonos speakers for surround. I didn’t do this, as my living room doesn’t really lend itself to a surround setup. But it can be done, even if the subwoofer costs almost triple the soundbar itself.

But that’s about where the smart features end. Unlike almost all of Sonos other smart speakers, the Ray does not support Google Assistant, Amazon Alexa, or even Sonos’ own voice assistant, as it doesn’t have a built-in microphone. I don’t necessarily care about that, as I use Apple devices in my home and thus rely on AirPlay 2 instead, which is present. But those in Google and Amazon’s ecosystem will need to keep the lack of support in mind.

The Sonos Ray isn’t as packed with speakers as some of Sonos’ other speakers, but thankfully it still sounds pretty good, especially for a device in this price range. The Ray has four speakers — two “woofers” and two tweeters. I put woofers in quotes because they’re a little small, but they can still deliver decently warm low mids and some bass.

Despite the fact that the Ray doesn’t quite support the same level of deep bass as some of Sonos’ other products, it can still reach decently low levels. You’ll get some rumble in the low-end, but none of the chest-thumping bass that you would get from a subwoofer. Most will find the bass response good enough, and certainly a big step up from the bass on offer by your TV’s built-in speakers.

Perhaps the best thing about the Sonos Ray’s frequency response has to do with the fact that it’s able to deliver clear, crisp vocals, making it very easy to hear dialog. In general, I found the Ray to offer decent high-end clarity, which always makes for a better listening experience.

But of course, the Ray doesn’t offer as good of a listening experience as Sonos’ more expensive soundbars, nor would you expect it to. The Ray is built to deliver stereo audio, which simply can’t get as immersive as the Beam and Arc, which support more immersive audio formats. It’s a little disappointing given the fact that some other sub-$300 soundbars support 3D sound formats.

What those other soundbars don’t support, of course, is Sonos’ Trueplay. Trueplay is built to tune a speaker to your room. All speakers sound different depending on how audio interacts with a room, and Trueplay is able to circumvent some of that. It has long been one of Sonos’ standout features, however, it currently only works on iOS. That’s likely because it uses your phone’s microphone to determine how frequencies interact with your room, and there’s a lot of variation in microphones in Android phones.

The Sonos Ray is another excellent product from Sonos, but as you would expect, it’s not without compromises. I see the biggest of those the fact that it relies on an optical port instead of HDMI, which introduces all kinds of complications around remote control and interoperability. But there’s also the fact that it’s limited to stereo audio, and doesn’t have a voice assistant.

But many will be able to look past those things — especially if they can get the soundbar to work with their TV’s remote. Those people will love the Ray, as a budget soundbar that looks good and sounds great.

The budget soundbar world isn’t without some serious competition, and perhaps the most obvious of that competition comes from Vizio. I find the frequency response to be better on the Ray to the other budget offerings I’ve tested, though some of those options support things like Dolby Atmos, like some of TCL’s soundbars. But the Sonos Ray is still generally better-sounding, which is what counts most.

Of course, there’s also the Sonos Beam. The Beam is $449, which is a fair bit more than the Ray — but if you can stretch to buy it, it is a better option.

Should I buy the Sonos Ray?

Yes. If you’re looking for a budget soundbar and aren’t willing to stretch for the Beam, the Ray is an excellent option.

More reviews: See our review of the Sonos Sub Mini!