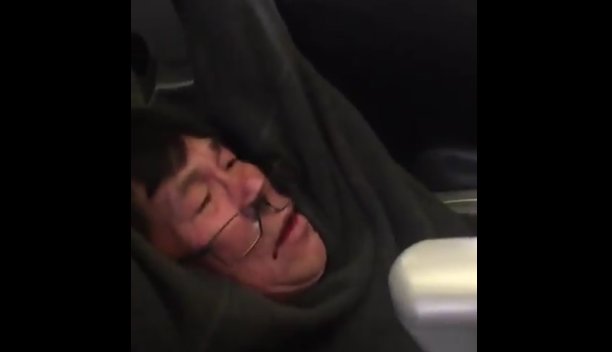 Video circulating on Twitter shows the moment a man was forcibly dragged off a United Airlines flight Sunday night. According to the passenger who posted the video and statements from United, the flight was overbooked, and several passengers were randomly bumped off the flight.

One of the unlucky few claimed to be a doctor who had to be at work the next day, so he refused to get out of his seat and leave the aircraft. As you can see in the video, police and airport employees forcibly drag him out of his seat and down the aisle, leaving him bloodied and dazed in the process.

@United overbook #flight3411 and decided to force random passengers off the plane. Here's how they did it: pic.twitter.com/QfefM8X2cW

Passenger Jayse Anspach tweeted video of the incident, which happened on United flight 3411 from Chicago to Louisville. United has not commented widely on the incident, but did say in a tweet that the flight was overbooked, and “one customer refused to leave.”

It’s possible that there is context missed by the video that would go some way to explaining the incident. Otherwise, United is going to have a serious PR problem on its hands.

Flight 3411 from Chicago to Louisville was overbooked. After our team looked for volunteers, one customer refused to leave ^MD

In a series of further tweets, Anspach detailed his account of what happened:

#United overbooked and wanted 4 of us to volunteer to give up our seats for personnel that needed to be at work the next day.

No one volunteered, so @United decided to choose for us. They chose an Asian doctor and his wife.

The doctor needed to work at the hospital the next day, so he refused to "volunteer." @United decided to use force on doctor.

A couple air port security men forcefully pulled the doctor out of his chair and to the floor of the aisle.

In so doing, the doctor's face was slammed against an arm rest, causing serious bleeding from his mouth.

It looked like he was knocked out, because he went limp and quiet and they dragged him out of the plane like a rag doll.

10mins later, the doctor runs back into the plane with a bloody face, clings to a post in the back, chanting, "I need to go home."

The incident comes barely a week after United made more bad headlines for its treatment of passengers, after it banned several teenagers in leggings from a flight, citing a dress code. In that incident, initial social media outrage was muted a little, after it was revealed the passengers were travelling using free passes for family members of employees, and as such were subject to different dress standards.

But in that incident, United’s initial knee-jerk reaction on Twitter — simply citing sections of United’s terms of service without explaining the context — caused a bigger storm than if it had just stayed silent. If the same thing happens again, the airline will probably want to rethink tweeting altogether.