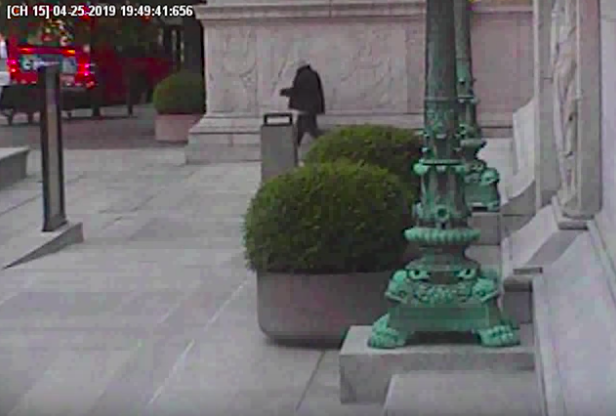 The National Archives Museum in Washington DC is more than 80 years old and houses everything from important presidential papers to some of the nation’s founding documents, like the Declaration of Independence and the Bill of Rights. Which is why it would have been a monumental loss to the country if the arsonist who tried to burn the museum down Thursday night had succeeded.

Grainy security footage the museum released on Friday showed someone wearing dark clothing and what looks like a hood appearing to set a container down along the side of the building that faces Pennsylvania Avenue, light it on fire and then run off. The museum suffered some minor damage, and while the suspect is still at large no one was hurt and the museum overall is fine.

“Security officers discovered the blaze and unsuccessfully attempted to put it out, but a fire department responded and was able to extinguish the flames,” the National Archives said Friday in a statement posted to its website. “Facilities staff are cleaning the area today … The incident is under investigation by multiple agencies, including the NARA Office of the Inspector General.”

The statement goes on to note that anyone who might have information is asked to contact the NARA OIG hotline at 1-800-786-2551 or by visiting https://www.archives.gov/oig/hotline.html.

According to the National Archives recap of its history, the museum was established in 1934 by President Franklin Roosevelt, and its major holdings date back to 1775. The records on file include slave ship manifests, as well as the Emancipation Proclamation; plus “captured German records and the Japanese surrender documents from World War II; journals of polar expeditions and photographs of Dust Bowl farmers; Indian treaties making transitory promises; and a richly bound document bearing the bold signature ‘Bonaparte’ — the Louisiana Purchase Treaty that doubled the territory of the young republic.” In other words, anyone who cares at all about the country’s past should be glad Thursday night’s attempt at destroying the museum didn’t work.