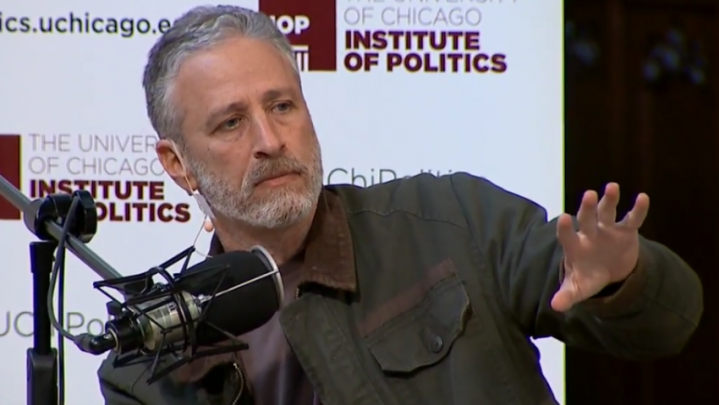 Jon Stewart earlier this week appeared at a “Times Talk” event to help promote a new book which outlines the history of The Daily Show during the Stewart era. During the event, Stewart opened up and didn’t mince words as he laid into Trump and the overall sorry state of the media in 2016.

Indeed, with the recent U.S. Presidential election being one of the most bizarre and contentious elections in recent memory, Stewart’s willingness to call out BS and hypocrisy across both sides of the political divide was sorely missed over the past few months. While Stewart made a few cameo appearances here and there, there’s truly no substitute for Stewart going in full-throttle on a particular topic.

DON’T MISS: NES Classic and Hatchimals might actually be in stock at one store this weekend

That said, Stewart’s appearance at the New York Times sponsored event was something of a breath of fresh air as the iconic comedian spoke freely about Trump and the media’s role in helping to create what was nothing short of an embarrassing, albeit entertaining, circus of an election.

Of particular interest is that Stewart completely bashed the notion that all of Trump’s supporters must be racist to a certain degree. Indeed, one of the more common refrains that some on the left have raised in the wake of the election is that Trump voters are either openly racist or tacitly approve of a racist assuming power. Stewart explained (via a transcript provided by The Huffington Post) why he thinks this point of view is nonsensical.

Not everybody that voted for Trump is a racist. I don’t give a f*ck what any of you say to me. You can yell it at me, you can tweet it at me. They’re not all racists. Or they’re not giving tacit support to a racist system … We all give tacit support to exploitative systems as long as they don’t affect us that badly.

Interestingly, Stewart also touched on how many of the 9/11 first responders he’s met over the past few months are unabashed Trump supporters.

A sh*tload of them voted for Trump. The same people that voted for Trump ran into burning buildings and saved whoever the f*ck they could no matter what color they were, no matter what religion and they would do it again tomorrow. So, if you want to sit and tell me that those people are giving tacit approval to an exploitative system ― I say, ‘OK, and would you put your life on the line for people who aren’t like you? Because they did.’ I get mad about this stuff.

Make sure to hit the source link below for Stewart’s full thoughts on Obama and what he thinks the next 4 years might look like.