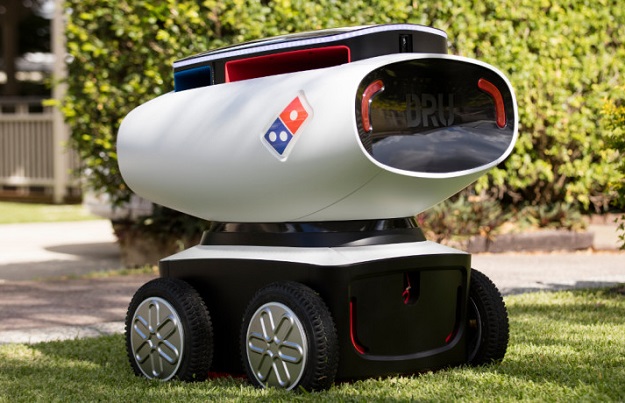 Who would have ever guessed that Domino’s Pizza would be on the vanguard of pizza delivery innovation?  Want to order a pizza solely with a pizza emoji? Domino’s has got you covered. What’s more, just a few months ago we highlighted a new Domino’s pizza delivery car specifically designed to keep a pizza warm and toasty, from the oven all the way to the kitchen table.

But now Domino’s has outdone itself. According to a report from Lifehacker, Domino’s recently teamed up with an Australian tech company to deliver an autonomous pizza delivery robot that can show up to your door, pizza in tow. Jam packed with cutting edge robotics technology, the delivery robot can reportedly navigate around obstacles, “converse” with customers, and last but not least, deliver steaming hot pizza and chilled drinks in a jiffy.

The futuristic delivery robot, also known as DRU (Domino’s Robotic Unit) can travel at about 12 mph and can easily handle varied terrain, though it’s not designed for major road use.

DRU uses a LIDAR sensory system that allows the unit to detect obstacles in its path and change its route accordingly. It measures objects and distance by illuminating them with a laser light. Each unit also comes equipped with traditional sensors that detect obstructions at close range, just like a robot vacuum cleaner.

It weighs approximately 190kg and has a maximum height of 1185mm (922mm with the compartment closed.) The body is constructed of ABS and urethane plastics, the lenses are made using PMMA (acrylic) plastics and the internal chassis is finished using aluminium and mild steel. It is water tight and weather proof.

Now you might reasonably be wondering: what’s to stop passersby from stealing the pizza when the robot is en route? Well, the pizza compartment remains locked until the robot reaches its destination. Once there, a customer can unlock the compartment via a special mobile code sent over by Domino’s.

You can learn more about the DRU via the Domino’s video below.