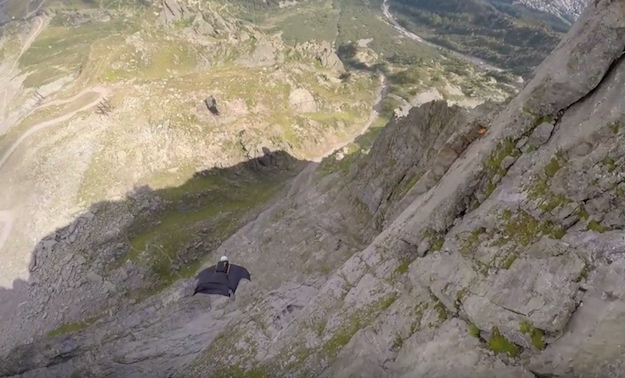 Daredevil Graham Dickinson has a flair for the dramatic. Last we saw, Dicksinson stared death in the face when he jumped offf of a cliff in Chamonix-Mont-Blanc and reached speeds of 111 MPH as he barely grazed by trees, rocks and any number of objects that would have undoubtedly killed him upon impact.

Well, Dickinson a few days ago uploaded new helmet-cam footage of that harrowing jump and, as you might expect, it needs to be seen to be believed. The video would feel right at home in a Hollywood action movie, and is all the more impressive because there’s no special effects wizardry or camera tricks in play. On the contrary, it’s just a man equipped with nothing more than a wingsuit, a video camera and pure adrenaline.

Wingsuit videos are typically pretty impressive, but Dickinson — a professional wingsuit BASE jumper we should point out — really seems take things to another level. As you’ll see via the footage below, there are many instances where Dickinson is seemingly just a few inches above the ground while traveling at incredibly high speeds.

Dickinson’s new cam-footage can be viewed below.

And for those who missed the original, here’s an even better view of Dickinson living on the edge and, quite literally, cheating death.

It certainly looks fun, but stunts like these aren’t for the faint of heart. We should point out that there have been a number of wingsuit deaths over the last few months, including a the tragic case of California man who was killed, while wingsuit flying, when he crashed into a cliff formation in Arizona this past January.