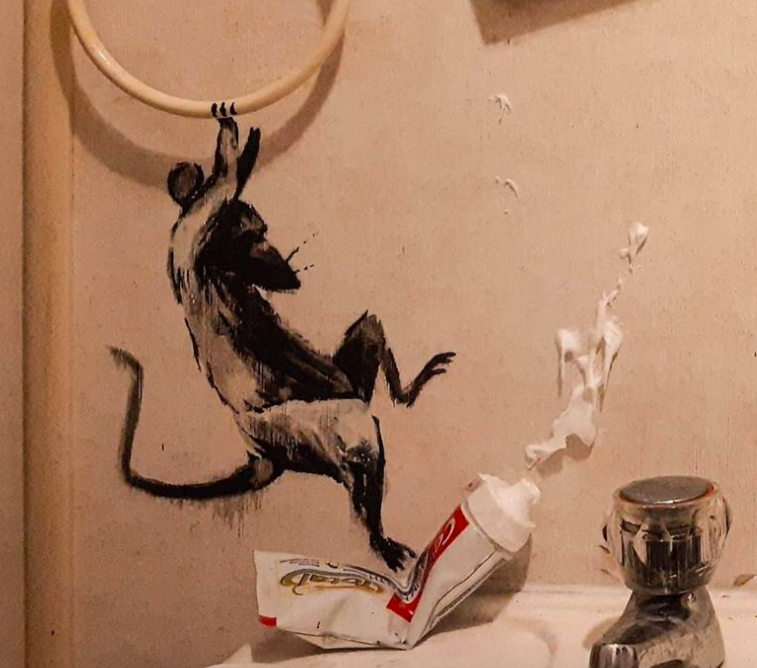 “My wife hates it when I work from home.”

That’s how the famously elusive artist Banksy captioned an Instagram post depicting his latest artwork, which has been “liked” more than 2.4 million times and which is hosted in perhaps his oddest choice of venues yet — his bathroom. Oh well, what can you do when most of the world is on lockdown right now as a result of the coronavirus? “We’re all in this together,” is a phrase you’ve probably heard more than once now since the crisis began. Which means — well, among other things, that for office workers and street artists alike, everyone is working from home for the time being.

Painted rats are a familiar image in Banksy’s work, and in the scene he posted to Instagram the rodents seem to be causing chaos around his bathroom — stepping on toothpaste to squeeze out a blast that seems to hang in midair, grabbing a mirror to knock it askew, and painting on the walls, among other things.

The images are classic Banksy, the product of his idiosyncratic wit and displayed in a non-mainstream setting — regarding the latter, it’s just that he’s swapped his usual venue of choice, the street, with his own bathroom. And it’s always remarkable, to me at least, how much press attention his new creations garner: Soon after his Instagram post appeared, articles detailing Banksy’s new creation appeared everywhere from CNN and The New York Post to The Guardian and the BBC.

You have to pause and study the full image for a beat to take it in, in its entirety. Seemingly everywhere you look, there’s a new “moment,” thanks to nine painted rats playing across Banksky’s bathroom. One of them is seen scampering across a toilet paper roll, while another seems to be marking the days prison-style with lipstick written on the wall.

This piece is Banksy’s newest creation since his art that appeared in Bristol, in the UK, back in February. It depicted a child with a slingshot pointed at roses that look like fireworks in the sky, although the image was vandalized soon after it appeared — someone wrote “BCC Wankers” across it, which seemed to be a reference to the Bristol City Council.